The #ScreenMediaExpo 2010 viral campaign is now well underway and can be seen here. 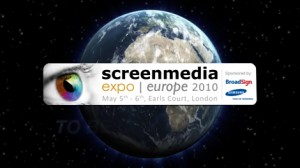 This year the theme is a ‘World of Digital Out of Home’ and the story so far sees the Earth being targeted by beings from another planet who are interested in planet earth as a networked world of intelligent DOOH advertising. Their aim is to bring more advanced Digital Out of Home advertising to the planet where adverts make more sense to consumers as individuals and their needs. This is achieved via a signal, ‘Signal X’ being sent down to earth transforming advertising as well as electronic devices in its path, and making them all work in a smarter way.

At the end of each viral the question “Are you ready for the Future” is asked, with the 2 day conference at Screen Media Expo on May 5th and 6th being promoted as the epicentre of the latest advances in Digital Out of Home technology, media and advertising.

Once again the 2010 virals were produced by Amigo Digital and kindly sponsored by Broadsign and Christie Digital.

This entry was posted on Monday, April 26th, 2010 at 12:00 @542 and is filed under Scuttlebut. You can follow any responses to this entry through the RSS 2.0 feed. You can leave a response, or trackback from your own site.