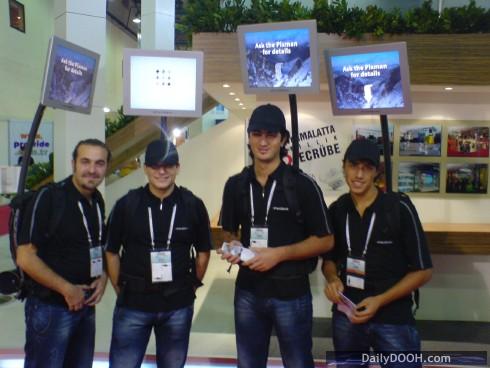 I first came across the Pixman Nomadic Media Solutions offering in the UK via a company up in Glasgow called Kommando and saw the offering again in Turkey.

Pixman head office is in Montreal, Canada, it’s creator is a chap called Daniel Langlois who founded Softimage – responsible for the 3D computer effects for films such as Jurassic Park, Gladiator, Titanic and Harry Potter (the commpany was later sold to Microsoft).

The Pixman screen was created back in 2002 when they were looking for a
solution that would extend the Toronto Film Festivals reach, by taking short films to people who would not normally visit a festival – namely people in crowded inner city public areas.

It was first used for the marketing of the first Microsoft Xbox – which took place in New York and from there Pixman as an experiential marketing solution was born !

The Pixman Turkey folks were in attendance at the MarketingIST event in Istanbul – where the photo above was taken and doing a great job at generating interest.

Pixman has this strange giraffe like device for their screens which means it is difficult to miss folks when they arre wallking around with it.

They tend to walk around in a group (like a herd if I am to stretch the giraffe reference to a ridiculous degree) which also adds to the impact.

Kommando is a UK agency specialising in non-traditional consumer engagement . They are Pixman’s exclusive partner for UK and Ireland.

As Pixman / Kommando in the UK say in their DOOHAN entry “Pixman is the worlds only wearable overhead screen solution; OVERHEAD guarantees greater standout in any crowded environment”

It’s also waterproof so is not limited to indoor exhibition events.

I like the wearable offerings. Works well at shows and I would have thought that every exhibition would want a modern version of the old ‘sandwich-board’ man.

This entry was posted on Thursday, September 20th, 2007 at 21:48 @950 and is filed under Scuttlebut. You can follow any responses to this entry through the RSS 2.0 feed. You can leave a response, or trackback from your own site.