The Best Ever #ScreenMediaExpo

Now in its 5th year, the organisers of #ScreenMediaExpo can easily lay claim to the fact that 3,195 attendees and 120 exhibitors have just walked away from the best event in London ever. 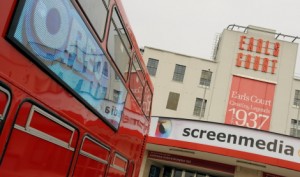 The LiteLogic Bus Outside Earls Court 2*

In term of exhibitors we at last had, the big corporates such as Christie Digital, Intel, Harris Broadcasting and NCR all attend which made a big difference we think to the dynamic of the event.

With a number of really big corporates now seemingly taking our industry very seriously, we think we are reaching a tipping point with those exhibiting at events like this being either very large or (relatively) quite small. For those software vendors like EnQii or screen manufacturers like Samsung who seem to think they don’t need to exhibit then they better wake up and smell the coffee or seriously face losing mindshare.

Let’s not forget the stalwarts of the show though – those folks that we have made mention of before who have been to the show year after year: Sony, Daktronics, Hyundai, Arch, Minicom, signagelive, BF Group and BLUEFOX.

Scala and Broadsign were both out in force and showed, we think, a lot of folks in our #DSTop10 why and how you should take an event like this so seriously.

In terms of leads, it seemed that there were genuine buyers in attendance 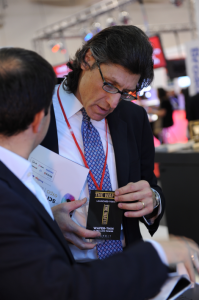 Whilst the usual, well known industry faces were in attendance and seen walking the floor (Don Sperring, Chris Frampton, Thomas Doktor, Mike Fabian, Stephen Platt to name a few) what was most impressive from our perspective is that when we looked out onto the carpet we actually knew very few of the people walking the exhibits. Surely a good sign for the industry that genuine buyers were in attendance (and not just tyre kickers and time wasters).

Celebrity came to the show floor as well in the form of the Apprentice winner Yasmina Siadatan and indeed Simon Sugar. Yasmina presented the last session of the DOOH Media Summit.

Simon Sugar told us “It was my first visit to a specific digital signage screen media expo, an interesting array of exhibitors” but let’s hope it’s not his last!

Like it or not, Amscreen are now a major force in the UK industry with a strong offering. We personally hope that they decide to take full part in the industry and exhibit next year.

The DOOH Media Summit seemed to be well attended – by our count, between 70 and 100 folks sitting in the auditorium at any one time. Hats off to Lock-On Productions who did a fabulous job in this upstairs auditorium with hiqh quality sound and vision. Perhaps #ScreenMediaExpo has now found its best home – the venue both upstairs for the paid for conferences and downstairs for the exhibit seemed pretty spot-on. Even the catering was quite good – albeit GBP 4.25 for a sandwich is a little steep! 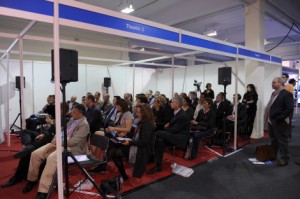 Standing room only in Theatre 2

We have never seen eye to eye with the organisers about the (walk-in) theatres on the show floor. All research they say points to the fact that attendees love these impromptu presentation areas. Certainly many were well attended but there were several as well where a sad presenter ended up talking to half a dozen people. Somehow we need to find a way to manage these better.

First off, we think there are too many theatres (there were 4 this time around). There were also too many ‘streams’ and even we had trouble in figuring out who was on, when and where.

The organisers also shouldn’t be afraid of repeating presentations. It was a real shame for example that Stephen Randall from LocaModa and Scott Davies (substituting for a poorly-ill Kelly Moulton) from never.no – BOTH great speakers and both talking about subject areas we are very interested in – were on in different theatres at the SAME time!

There is no harm in good speakers repeating their presentations later the same day or indeed the following day. We also need a better way of advertising / reminding folks who is on when.

Anyhow, next year we would like to see less theatres, more repeats of the better speakers AND all the theatres on the show floor need better acoustics (it’s noisy out there!).

In terms of the exhibit space: there were a lot of boring square stands and exhibitors need to try a bit harder we think (ourselves included in that criticism with our very boring standard shaped blogger lounge).

All in all a truly excellent show. It bodes well for the industry.

This entry was posted on Friday, May 7th, 2010 at 13:01 @584 and is filed under DailyDOOH Update. You can follow any responses to this entry through the RSS 2.0 feed. You can leave a response, or trackback from your own site.

3 Responses to “The Best Ever #ScreenMediaExpo”