Covering #NABShow and #Kioskcom the week before last (yes the week BEFORE last) should have been relatively easy but what should have been a simple travelogue ended up turning into more of a bummel** than anything else (especially as we will be returning to Las Vegas in less than 6 weeks time for #InfoComm2010). 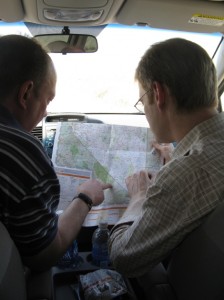 Eyjafjalla certainly caused a lot of disruption (and pain) and whilst I met dozens of folks at Las Vegas – McCarran International Airport finally making their way home (Friday 24th April) after an unintentional lengthy stay in Las Vegas following on from attending #NABShow we mustn’t forget that there are still dozens more still there (Jason Cremins, signagelive heads home Sunday and our very own AHN heads home Tuesday – a week or more after they should have headed home).

Anyway, Insha’Allah, as we all return to the UK this week our thoughts focus on #ScreenMediaExpo May 5th and 6th (and err a general election in the UK on the 6th as well) – an event (#ScreenMediaExpo not the general election) that should see close on 3,000 people converge on what has become over the last couple of years a really, really good exhibition.

Gail, Andrew, Jorge, Onyee and myself will all be ‘manning’ the Blogger Lounge and we look forward to meeting old friends and making some new ones as well so please make a point of coming along to say hello.

I will also be on stage with Denys Lavigne from Arsenal Media doing a comedy double act – ‘What’s Wrong With The King‘ – one thing is for sure we are going to tell it like it is!

**When asked by one of the characters in Jerome K Jerome’s book Three Men on the Bummel “how would you translate [bummel],” the narrator replies…

“A ‘Bummel’,” I explained, “I should describe as a journey, long or short, without an end; the only thing regulating it being the necessity of getting back within a given time to the point from which one started. Sometimes it is through busy streets, and sometimes through the fields and lanes; sometimes we can be spared for a few hours, and sometimes for a few days. But long or short, but here or there, our thoughts are ever on the running of the sand. We nod and smile to many as we pass; with some we stop and talk awhile; and with a few we walk a little way. We have been much interested, and often a little tired. But on the whole we have had a pleasant time, and are sorry when it’s over.“

This entry was posted on Saturday, April 24th, 2010 at 09:53 @453 and is filed under Scuttlebut. You can follow any responses to this entry through the RSS 2.0 feed. You can leave a response, or trackback from your own site.