Kinetic Worldwide partnered with Clear Channel Outdoor UK to undertake some face-tracking research into consumer moods and engagement with digital out-of-home in the mall environment. 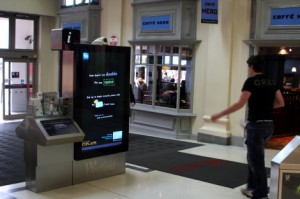 The research also featured a separate footfall measure of shoppers and face-to-face interviews.

The first notable finding was that ad contacts were correlated to footfall, indicating there was a general predisposition to see the panel. In particular, people’s relaxed mindset at the weekend led them to give more attention to advertising through longer contact duration.

However, even during the week average contact duration was well above the Postar definition of conscious engagement – a quarter second or above. Overall, one million seconds of ad exposure were recorded per week.

The face-tracking camera also revealed that shoppers were three times as likely to be happy than sad in a mall environment. Younger audiences were also found to look at the advertising for longer, while older audiences were more expressive.

Perhaps unsurprisingly, women were found to be happier than men in malls, but men were more engaged by animated campaigns.

The study also provided insights into the performance of digital out-of-home campaigns carrying static or moving content. While animation and scrolling copy worked better than static copy, the degree of animation was crucial to attracting attention.

Use of full video or over-elaborate animation had very little additional impact – this is not new, Kinetic has proven this time and time again now BUT it is always worth repeating, Ed

There were also interesting findings related to colour and use of text, which reinforce traditional learnings over the best creative use of out-of-home.

Nick Mawditt, Global Director of Insight and Marketing at Kinetic Worldwide, told us “The research demonstrates the strong level of consumer engagement for digital out-of-home in malls and tells us what types of ads work best and at what times. The mood data is a real bonus and those advertisers clever enough to target by the mood and mindset of the consumer can really benefit.”

When interviewed, shoppers were overwhelmingly positive about the mall experience. Statements included “it’s an enjoyable place to spend time” and “it’s a good idea to have advertising so close to the shops”. They also thought that digital outdoor was “innovative” and showed “advertisers as dynamic brands”.

This entry was posted on Thursday, May 13th, 2010 at 11:08 @505 and is filed under DailyDOOH Update. You can follow any responses to this entry through the RSS 2.0 feed. You can leave a response, or trackback from your own site.