A new ‘Mobile Audience Insights Report‘ from JiWire, San-Francisco-based mobile audience media company, shows that ads in mobile applications are especially effective, with over half of survey respondents (52%) acting on an advertisement in an app in the last 30 days, and 18% making an actual purchase as a result of it. 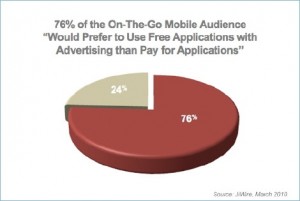 It’s one of many new facts in the report released today that examines device use, consumer adoption of Wi-Fi and consumer preferences for mobile content and advertising delivery. The report is intended to highlight market trends for advertisers

Continuing to focus on how people consume mobile content, this quarterly report focused on mobile applications. JiWire’s On-The-Go Audience research demonstrates that this audience responds to free, location-based ads at a high rate. Among various other points revealed are that:

“People have a completely different perception of mobile content and advertising when they’re on-the-go compared to when they’re at home or in the office,” says David Staas, senior vice-president of marketing, JiWire. “With nearly half of the on-the-go mobile audience saying they are more likely to engage with an ad that is relevant to their current location, this is an opportunity brands and agencies are more rapidly embracing.”

For the first time, JiWire’s report shows Apple’s iPhone ranking higher than Apple iPod Touch in share of ad requests, which flips the trend seen in previous reports. Android saw strong growth of 44% from last quarter and continues to be the second most popular OS. 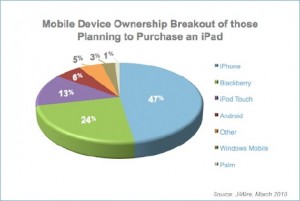 The iPad had an immediate impact on Wi-Fi usage, reinforcing the device proliferation beyond laptops and mobile phones seen in previous quarters. The average number of total daily uniques on the iPad was 1.53% of all unique ad requests across JiWire’s network, a significant number for one device in its first month on the market. A total 23% of the On-The-Go Audience plans to purchase an iPad. Of those, 60% already own an Apple iPhone or iPod Touch, 40% own a non-Apple device – and 27% of those planning to buy an iPad are Blackberry owners. This shows the iPad is going to be a big crossover device for a lot of non-Apple mobile owners.

Wi-Fi usage continues to grow, increasing 15.8% from last quarter, driven by more locations, more Wi-Fi enabled devices and an increase in the number of free locations. Specifically, the use of Wi-Fi in cafes increased significantly over the past quarter, up over 50%. The number of public Wi-Fi locations has experienced a 20% annual growth rate from Q1 2009 to Q1 2010. 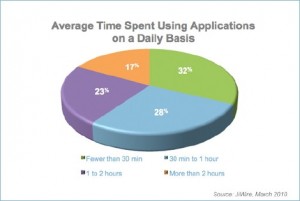 JiWire’s fourth Mobile Audience Insights Report is based on data from approximately 285,000 public Wi-Fi locations, as well as a survey of 2,030 customers randomly selected across JiWire’s Wi-Fi Media Channel from March, 2010 – April, 2010.

JiWire serves advertisements to over 30,000 public Wi-Fi locations in North America and records data from every ad request. This report is based on the ad request data collected from January 2010 – March 2010.

The full report is available from JiWire.

This entry was posted on Wednesday, May 12th, 2010 at 12:59 @582 and is filed under DailyDOOH Update. You can follow any responses to this entry through the RSS 2.0 feed. You can leave a response, or trackback from your own site.