Limited Space an out-of-home media owner in the premium shopping mall market in the UK, is using its gaming pack, including its Adlift lift door advertising, panoramic large format posters and Ad HD digital screens to promote THQ’s release of UFC Undisputed 2010 (last Friday on 28th May) in flagship malls such as the Arndale Centre, Manchester and Cabot Circus in Bristol. 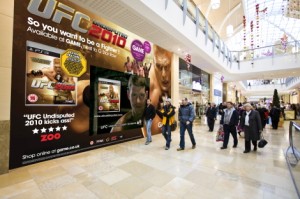 As part of the campaign, which is designed to target 15-34 year olds, THQ has taken ownership of Limited Space’s Ad HD screens, which involved creating specially designed giant THQ billboards and integrating the screens which are up to 110 sq/ft in size. They are all running 100% THQ content with full audio and the combination of static and digital seems to showcase the game and amplify the impact it delivers.

Limited Space’s Panoramics are also carrying the THQ artwork in order to dramatise the game and additionally, Adlift sites (full sized lift door posters) strategically located around the mall and in close proximity to gaming stores, are presenting THQ with an opportunity to cash in on impulse buying.

The combination of all three static and digital formats is enabling THQ to dominate the mall environment and achieve enormous impact and cut-through amongst a highly desirable audience.

UFC Undisputed 2010 carrys a ‘15 certificate’ so Limited Space worked closely with the client, the ASA and the malls to strike a balance between the artwork suiting the mall environment but also representing the game in the best possible way.

Jeremy Taylor, Mindshare told us “Limited Space are great to work with because they really understand the mall environment and can advise us on what will work best for the client in that space. THQ wanted a campaign with real impact. Limited Space’s malls are the most popular and consequently have the highest footfalls so the combination of that and their gaming domination pack was perfect to engage with UFC’s target audience, and drive direct sales right at the point of purchase.”

The campaign, which runs until 6th June, was planned and bought by media agency Mindshare and outdoor specialist Kinetic.

This entry was posted on Tuesday, June 1st, 2010 at 07:29 @353 and is filed under DailyDOOH Update. You can follow any responses to this entry through the RSS 2.0 feed. You can leave a response, or trackback from your own site.