Battersea Power Station appeared to take off into the night sky last Friday and was then turned into a level from Nintendo’s Super Mario Galaxy 2 before finally being smashed by a giant Space Worm! 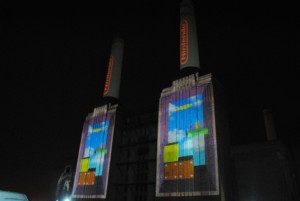 The projections also featured live game-play turning the power station into perhaps the largest ever games consoles and giving Mario fans a sneak preview of unseen footage from the game.

Big brands it seems are keen to put their marketing spend into outdoor projection well into the summer months thanks to the advent of this sort of video mapping projection technology.

This entry was posted on Monday, June 14th, 2010 at 06:43 @322 and is filed under DailyDOOH Update. You can follow any responses to this entry through the RSS 2.0 feed. You can leave a response, or trackback from your own site.