The digital ads for Cadbury Caramel, Cadbury Crunchie and Cadbury Turkish biscuits will run as a day-part campaign to create awareness of the new biscuits during busy household shopping periods on ATM screens at selected Tesco stores. 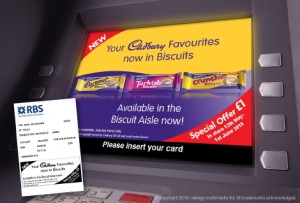 Planned and booked through atmAd, the digital advertising will deliver 480,000 targeted one-to-one engagements with shoppers and encourage trial by promoting the £1 in-store offer via the screens and ATM receipts.

Choosing such a highly targeted approach we are told will enable Burton’s Foods to reach an audience where 70% are the main household shopper. Forty seconds of ad dwell time in close proximity to Tesco maximises the opportunity to influence customer purchasing and brings the in-store offer to life, before the customer steps into the busy store environment.

Rochelle O’Toole, Channel Development Manager at Burton’s Foods, commented: “The biscuit market is extremely crowded and competitive. The launch of Cadbury Crunchie, Caramel and Turkish biscuits offers biscuit varieties of brands which have phenomenal consumer affection and is already bringing much needed excitement and pleasure to a sector that has been characterised by low levels of innovation and investment.

“Using atmAd’s shopper marketing network provides the opportunity to gain an even greater edge in our marketing campaign by reaching consumers close to the decision-making moment, thereby placing our brands front of mind and increasing the likelihood of message recall and, ultimately, product purchase.”

Justin Stark, Director of National Sales at atmAd told us “Burton’s Foods has a well-defined target market of household shoppers with children and we’re maximising the communication opportunity by combining the atmAd shopper marketing proposition at Tesco with a day-parted timetable. We’re delivering the message to the core audience during periods in the day when they are most likely to shop and make impulse purchases.”

The new Cadbury Caramel, Crunchie and Turkish biscuits are available in retailers nationwide at an MRSP of £1.59 for 130g packs.

This entry was posted on Monday, June 14th, 2010 at 07:18 @346 and is filed under DailyDOOH Update. You can follow any responses to this entry through the RSS 2.0 feed. You can leave a response, or trackback from your own site.