If 2009 was the year of mass Twitter excitement among the general population, especially for public figures and celebrities, then 2010 seems to be the year of widespread social media engagement in business.

At InfoComm this year, the total number of tweets using one of the hashtags #InfoComm, #InfoComm10, #InfoComm2010 (and initially #IC10) was just under 5,000 from 800 twitterers. We compared that with the more TV and broadcast oriented NAB show which took place two months ago in April, also in Las Vegas, and for that there was 8,000 tweets from 1,800 twitterers. This is broadly in line with the attendance figures for each show (roughly 30,000 for InfoComm and 80,000 for NAB).

We did a similar comparison to that of the more digital signage focused shows earlier in the year, although InfoComm and NAB are of course bigger shows by an order of magnitude. 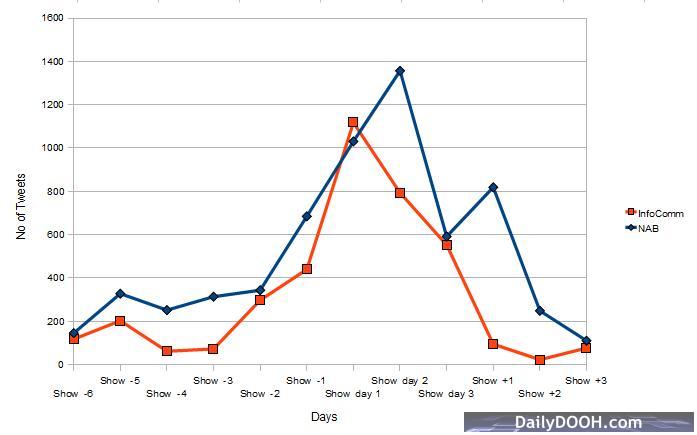 The above graph shows the tweets by day of both shows, aligned around the actual days of the show. InfoComm (in orange) is a three day show, but NAB (in blue) is a four day show, so its fourth day actually falls on the “Show +1” day on the legend along the bottom. This accounts for the large spike on that day (about 800), whereas for InfoComm, Show +1 was a Saturday, with relatively low traffic.

Despite NAB having totals in proportion to InfoComm in line with attendance figures, what the graph also shows is that on the show days themselves, InfoComm actually exceeded NAB on day 1, and matched it on day 3, with only day 2 looking anywhere near in proportion to attendance. This is a good result for InfoComm, as it suggests that when taking the relative size of the shows into account, InfoComm punched nicely above its weight for engagement during the show itself.

This is despite the Twitter community being a bit spread out across multitple hashtags. While there were two official options of #InfoComm10 and #InfoComm2010, people were also using #InfoComm, and for a while earlier in the year #IC10 was also in use, but it turned out that there were a couple of unrelated events in other lands which also used it. This highlights the importance of actively settling on a good social media strategy well in advance of an event and making sure that it brings the community cohesively together for maximum impact.

This entry was posted on Thursday, June 17th, 2010 at 12:58 @582 and is filed under DailyDOOH Update. You can follow any responses to this entry through the RSS 2.0 feed. You can leave a response, or trackback from your own site.