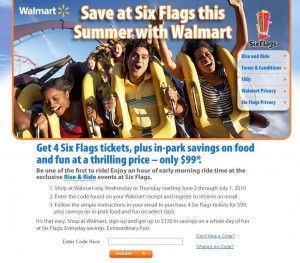 Included is information about the benefits of ‘Walmart Family Days’ , as well as national Walmart branding spots that can be seen on Six Flags TV, Jumbotrons, In-Park Theater Network and Digital Menu Boards throughout Six Flags’ parks, and online at sixflags.com. In turn, Walmart is support ing the promotion in its stores as well as through in-market publicity and online. 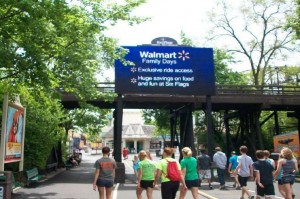 This means a savings for families of up to $120 on a whole day of fun by delivering family entertainment at an affordable price. Throughout the month of June, Walmart customers shopping on Wednesdays and Thursdays can use a weekly promotion code on their receipt to register to purchase the $99 ‘Walmart Family Days’ package with four tickets to Six Flags on Wednesday, Thursday or Friday. Customers enter the promotion code from their Walmart receipt at www.sixflags.com/walmart to register and receive an email for package redemption. 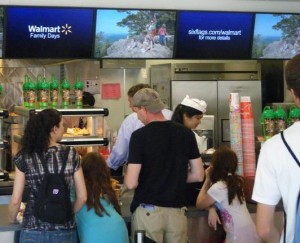 Six Flags have a long tradition of providing value to their customers, and this promotion offers a great opportunity for families to have a fun day with an eye on their budgets,” says David McKillips, senior vice-president, corporate alliances, Six Flags Media Networks, the media and sponsorship sales division of Six Flags Entertainment.

Six Flags parks will also introduce ‘Walmart Wednesdays Rise & Ride’ where ‘Walmart Family Days’ ticket holders can enjoy an extra hour of early morning ride time on Wednesdays. Plus, ticket holders will have access to other in-park savings on food and attractions.

This entry was posted on Sunday, June 20th, 2010 at 13:02 @584 and is filed under DailyDOOH Update. You can follow any responses to this entry through the RSS 2.0 feed. You can leave a response, or trackback from your own site.