News broke this week that former APPRENTICE winner Lee McQueen is leaving his job at Amscreen to take up, of all things, public speaking – whether there is money to be made in talking publicly and loudly about big boobs is anyone’s guess? 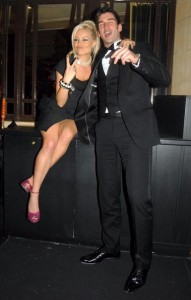 That's What I'm Talking About

The currant bun reported that “the wannabe tycoon has already given motivational talks to youngsters for a council” – perhaps the first lesson ought to be on how NOT to get embroiled in unfair dismissal tribunals or using the word ‘voluptuous’ in the office!

The UK newspaper pointed out that he had already carried out work for Hillingdon Council in the capital and carried a quote from a council spokesman who said “He has been involved in training events in the borough through Hillingdon Training Ltd, a private company.”

Lee is set to leave Amscreen at the end of this month.

Of the five winners of the BBC reality TV series only Yasmina Siadatan, who won last year’s contest (and who gave a very good presentation at this year’s #ScreenMediaExpo) is still working for Lord Sugar.

In the official press release from Amscreen, Lee said “Having gained a huge amount of experience in my role at Amscreen, I felt now was the right time to start up on my own. I would like to thank all the staff at Amscreen, particularly Lord Sugar and Simon Sugar, for all the help and assistance they have given me during my two years at one of the most forward-thinking companies around.”

Lord Sugar said “Lee has made an important contribution to Amscreen and we wish him the best.”.

This entry was posted on Friday, July 2nd, 2010 at 08:43 @405 and is filed under DailyDOOH Update. You can follow any responses to this entry through the RSS 2.0 feed. You can leave a response, or trackback from your own site.