Spending activity in digital out-of-home in the second quarter of 2010 was constricted versus original expectations at the beginning of the year, according to the Q2 Digital Out-of-Home Market Review launched today by Adcentricity, New York. 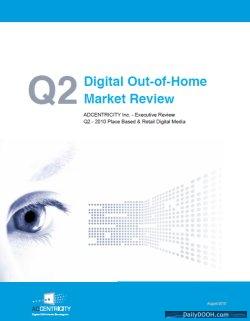 In fact, overall ad spending in the U.S. was up only 4.5% vs. a 48% global increase based on Nielsen’s figures, with only television and online advertising experiencing what could be called ‘healthy’ growth.

It appears that advertisers have been indecisive about ‘what the brand really wanted to do’, holding back their spending – and frustrating their agencies in the process. Even campaigns already booked and committed became delayed due to lack of creative and that afore-mentioned brand uncertainty. Campaigns and activity that were expected to begin in April through the end of May did not materialize until mid-May through to the end of June, pushing budgets and campaigns much further than most in the media business expected.

In addition, ethnic marketing budgets seem to have been held back by many advertisers until 2011.

“After the past couple of years in the U.S. companies are retrenching and trying to get back to business with the mass markets first, and then will get back into the ethnic markets,” says Rob Gorrie, CEO, Adcentricity. “An exception to this is McDonald’s, which is doing well with a bottom-up philosophy and a strategy that’s being led by the ethnic markets.”

While Adcentricity has also seen the spending slowdown, its own Q2 was the aggregator’s single largest booking quarter on record, paving the way for a strong second half of the year.

Adcentricity’s report is a compilation of market data and insight best leveraged as a reference guide for agencies and marketers seeking a better understanding of the DOOH advertising sector.

“There were significant bright spots and activity occurring that is driving the DOOH market in a very positive direction,” says Jeff Atley, vice-president, Adcentricity.

Among DOOH advertisers, financial services is leading the pack and driving significant growth in the market with 55% of the booking activity led by this sector.

“The proof is in the pudding,” says Gorrie. “Financial services want to be where their customers are, and they see that they’re getting results, so they are both increasing their spending and are spending more consistently.”

Intense competition in the telecomm sector means more campaigns will come in the second half of 2010. However, the sector did sustain its interest in the DOOH market quarter over quarter in the first half of the year.

The home décor/renovation category has emerged with some seasonal investments, indicating that DOOH is being recognized as a potential promotional vehicle to drive in-store traffic and affect in-store behavior.

Government spending has started in DOOH as the U.S. heads into some upcoming regional political battles. However, network reticence, operational restrictions and sometimes venue owner/network operator political biases are restricting full adoption of the medium.

A bright spot in the quarter was that the pharmaceutical industry is beginning to realize that the thousands of doctors’ office environments that have DOOH create a unique opportunity for drug makers and other related pharma products.

“I think that a lot of pharmaceutical companies previously didn’t know of all the networks open to themuntil recently,” says Gorrie.

“From a location based perspective, we’re seeing strong interest from venues like c-stores, restaurants and bars, airports and buses,” says Atley. “Of no surprise is that education will continue to play a key role in the decision making process as networks continue to prove their value and provide true ROI to marketers.”

This entry was posted on Wednesday, August 11th, 2010 at 05:50 @284 and is filed under DailyDOOH Update. You can follow any responses to this entry through the RSS 2.0 feed. You can leave a response, or trackback from your own site.