News reaches us (for the umpteenth time now, by LinkedIn) that nice guy Robert Padmore (he was one of the only people at Avanti Screenmedia who knew and talked sensibly about retail but was rarely allowed to speak – publicly at least (much to the detriment of said business) has joined the St Ives Group. 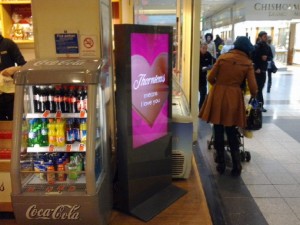 Robert has extensive retail marketing experience and digital communication expertise (he was at Safeway for 5 years as Instore Marketing Manager) which will serve him well in his new position as Head of Digital Media. Robert will report to Simon Cadby and we wish him well.

One of the group’s first projects was to hire ace digital signage agency Pixel Inspiration to do the creative work on the Digital Signage implementation for chocolate retailer Thorntons which some beady eyed folk may have seen around Manchester (picture above).

This entry was posted on Friday, August 20th, 2010 at 10:35 @483 and is filed under DailyDOOH Update. You can follow any responses to this entry through the RSS 2.0 feed. You can leave a response, or trackback from your own site.