There are plenty of rumours doing the rounds in the UK of some major contract wins for iconic Shopping Mall network owner RAM Vision. The first of these is that they have been awarded the contract for Liverpool One by Grosvenor Estates as well as several new locations with Land Securities. 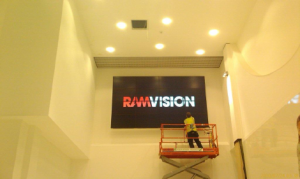 The Oracle in Reading is our local / closest Shopping Mall and we heard on a recent trip that preparations are being for a large iconic screen deployment – this would be similar one would expect to that which we have seen (and reported on here) in Blackburn – that will be good news then for YCD Multimedia and Samsung as there’s no reason to expect that they would move away from a proven formula already rolled out successfully.

Securing these sorts of deals is of massive importance, not only to RAM Vision but for the Mall sector in general in the UK which as regular followers of us and the UK digital screen sector in general will know, has been poorly served in the past.

By our estimates this would mean that RAM Vision are now in 42 Shopping Malls and have a presence in every major UK city.

It may be a bit too early to say that RAM Vision has consolidated its position as the dominant DOOH medium in the UK Mall Sector just yet BUT these sorts of deals do give agencies almost a one stop network for Digital Landscape (albeit hanging from the ceilings), Large Screen and ICONIC screens in some of the best UK Shopping Malls.

This entry was posted on Thursday, August 12th, 2010 at 19:42 @863 and is filed under DailyDOOH Update. You can follow any responses to this entry through the RSS 2.0 feed. You can leave a response, or trackback from your own site.