Driving A Fiat From A Cinema Seat

Beep, beep, and away we go, right from our cinema seat!

In what is believed to be a world-first, Fiat’s new advertising campaign in Spain combined both screen and ceiling projection to recreate the sensation of actually driving its new Fiat 500 convertible. 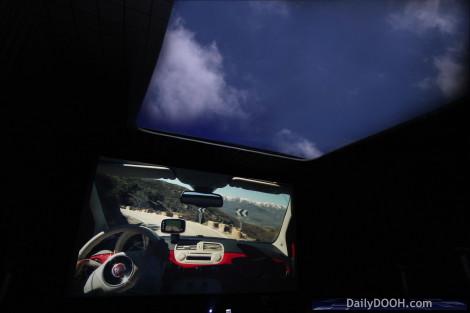 Fiat dreamed up its newest advertising idea to tie in with the release of Tim Burton’s latest movie, Alice in Wonderland. Conceived to introduce the Fiat 500 convertible in Spain, the Italian carmakers came up with an innovative commercial for Spanish cinemas using a Christie Roadster S+20K projector.

The advertising was screened in two Spanish cinemas in Madrid and Barcelona just prior to the film’s showing. Initially, the audience viewed the same ad for the Fiat 500c as seen on TV. So far, so good!

Then the real show started when the ad ended: the dashboard of the Fiat 500c appeared on the theatre screen as if the audience were inside the car, and then, next thing, a projection was screened on the cinema’s ceiling simulating the opening of the car roof, revealing the sky above the audience’s head. The public was then treated to a 30-second ride, transmitting the experience and sensations of driving without ever leaving their seats.

Developed by the companies TheLab003, Barcelona, and WPP agency MAXUS CICM, Madrid, for Fiat, the advertising was realized by Discine, Madrid.

To create the effect, a Christie Roadster S+20K projector from Christie Digital Systems, delivering 20,000 lumens, was used to project on the cinema theatre ceiling, and digital technology for the screen used software designed to synchronize both the screen and ceiling projections.

“We needed a high-power projector for screening on the ceiling and on black,” says Ignacio De Juan-Creix, from the creative department of TheLab003, a below-the-line agency using interactive multimedia technology for the production of shows, actions, and promotional and advertising marketing services, designing specific software for each action.

San Juan Pueblo-based Tecnicongress, specialized in technical solutions and services for all kinds of audiovisual events, supplied the Christie projector.

“With a brightness of 20,000 lumens, the Roadster S+20K was the ideal projector for this kind of action, guaranteeing superb performance,” says Juan Pina, technical director at Tecnicongress.

The Roadster S+20K was located at the front of the theatre in a central position 15m from the ceiling. The screening surface covered a 12m x 16m area. The player was an Emotique System with software developed by TheLab003, conceived to synchronize the screen and ceiling projections.

“This software was specially designed for this action with a view to adapting the image and visually creating a perfect result using mapping and blending techniques,” says De Juan-Creix. “The audience left the theatre with a very positive impression. At first, they thought the movie was a 3D projection, coming out of the front screen and covering the theatre. It took them completely by surprise. We achieved our goal: to get 500 people inside a Fiat 500c!”

This was the first time a simulator was recreated for a cinema theatre. Thanks to the joint screen and ceiling projection the audience had the feeling of driving the Fiat 500 convertible, and during the 30-second ride, the public was shown the car’s features and how it felt to drive it.

“Our goal was for the viewer to get the experience of driving the Fiat 500 convertible, an exceptional, unique car designed for those who enjoy driving and emotions,” says Oscar Sáenz San Martín, advertising and media manager at Fiat.

Juan Carlos Aparicio, general manager, Discine, says that this is the first time that an on-screen image was synchronized with an image projected on a different surface.

“This is an extraordinary introduction and an incredibly important step forward,” he says. “People really appreciate innovation and advertising spots can be like little works of art.”

This entry was posted on Tuesday, August 24th, 2010 at 07:50 @368 and is filed under Scuttlebut. You can follow any responses to this entry through the RSS 2.0 feed. You can leave a response, or trackback from your own site.

One Response to “Driving A Fiat From A Cinema Seat”