Last Wednesday afternoon, I had the privilege of being the first ‘outsider’ to visit Magenta Research’s new (year old) R&D labs on Montreal’s West Island district and came away impressed. 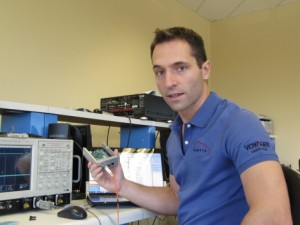 I didn’t take my camera – probably wouldn’t have been allowed to take photos anyway – all photos supplied here by Magenta themselves, Ed AND technical writers aren’t even allowed in. Why? Because Magenta claims to be about two-to-three years ahead of its competitors and its hard working team isn’t about to give away any secrets.

To describe itself, Magenta uses the line as developing ‘Multiformat AV extensions and switching over fibre’ – as Kamran Ahmed, director of international sales and senior technology advisor, said, “We do the equipment part of the plumbing behind the AV and digital signage industry”. A much more detailed explanation can be found on the company’s website.

First, one had to look at the current seven members of the ‘dream team’ built by Stephane Tremblay, chief engineer and head of R&D. Every one of the current staff of seven (a mix of men and women, I was happy to note), is a graduate or post grad engineer with a minimum of 10 years experience each. The plan is to build to a group of at least 12 engineering staff, and the offices have plenty room for expansion.

The ‘dream team’ all come from Montreal, and since I’ve been asked by others what makes Montreal such a technical hub, I asked Ahmed his opinion.

“First of all, there are five great universities in the area turning out engineers. Then there are the government subsidies helping the companies. And the cycle is feeding itself. It shows in the industries like multimedia, aerospace, 2D and 3D software. Tax subsidies and a lower cost of living definitely help.” 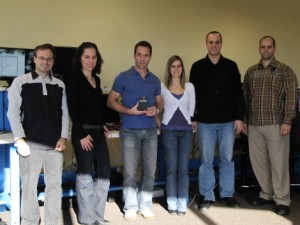 Members of the Dream Team

Ahmed and Tremblay explained the workings of what I referred to as the ‘little black box’ that’s the heart of Magenta’s R&D work. They showed the various ways it can be used between the content source and the destination displays. A complex set of cable, fibres and the inner workings of many interlinked black boxes covered the conference room table.

The company develops its products with three things in mind: cost, complexity – especially since already-installed systems often have to switch from analog to digital – and the need for systems that can work with both. The Montreal R&D office deals with solving the problems that Magenta’s New Milford, Connecticut offices implement, Ahmed explained. Equipment is shipped from the U.S..

Magenta’s products are sold and serviced world-wide through value-added partners. The U.S. is Magenta’s biggest market and Australia, Canada, Japan, the Middle East and the U.K. are some of its major markets. Each of its products is customized according to the needs of its clients for now and in the future.

“Our black boxes are smart boxes, and they’re future proof,” Ahmed said, further demonstrating how some boxes can be combined together and changed as upgrades on various aspects may be needed in the future.

Among the many companies in North America where Magenta’s products have been installed are Canada Post, many of the Casinos in Las Vegas, Madison Square Garden, the Montreal Metro system, Vancouver’s 911 Centre, many museums including the Smithsonian Institute, and dozens of others. Up next are more than 2,500 displays for an unnamed Canadian bank.

Ahmed said, “We’re doing a pilot of several bank branches, will then do a case study, and following that, with approval, will roll out across all branches.”

All in all, a very educational day!

This entry was posted on Monday, October 25th, 2010 at 07:01 @334 and is filed under DailyDOOH Update. You can follow any responses to this entry through the RSS 2.0 feed. You can leave a response, or trackback from your own site.

One Response to “Inside Magenta Research Labs”