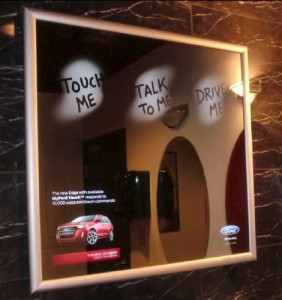 Using the impact of Oakville, Ontario-based AddMirror, Ford is promoting its ‘Touch, Talk, Drive’ branding for the new crossover in a hot and steamy manner.

A series of three teaser ads appear, one after the other, on a steamed up mirror to reveal messagessuch as ‘Touch Me, “Talk to Me’ and ‘Drive Me’ when viewers approach. In the final reveal, a stunning picture of the new 2011 EDGE is shown with the tagline ‘MyFordTouch responds to 10,000 voice and touch commands’.

The campaign is running for four weeks. Creative was developed by Young & Rubicam, with media handled by Mindshare in Toronto.

This entry was posted on Tuesday, October 26th, 2010 at 08:00 @375 and is filed under DailyDOOH Update. You can follow any responses to this entry through the RSS 2.0 feed. You can leave a response, or trackback from your own site.