There was a French touch to the black-tie event that we missed last week at the Awards ceremony organised by Retail Systems Magazine at the Grosvenor House Hotel in London’s Park Lane. Now into their fifth year, the Awards look to recognise excellence and innovation in the field of information technology primarily within the UK retail sector. However one category that looked across the Channel was the ‘European Solution of the Year‘. 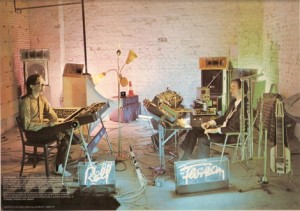 Taking the Kraftwerk reference a little too far

This award was to recognise a European retailer who has implemented an innovative piece of technology into its organisation. Judges were looking for evidence of how the deployment of the technology has led to an improvement of the overall efficiency of a retailer’s operations. Entries had also to demonstrate how the technology has made an impact across all levels of the organisation. Last year’s winner was the very British Carphone Warehouse.

This year, there were three contenders on the short-list:

… and this year the judges widenend their vision of Europe and gave the award to a French installation in advance of President Sarkozy’s visit to London today – the winner of this category is well known to our readers – the controversial FNAC/BrightSign installation by TMM Communication (with content by Dagobert).

I understand however that Sarko claimed to be too busy selling aircraft carriers to collect the award himself and that he considerately left that honour to the deserving winners, Ed

For retail anoraks that also missed the event, we’re happy to report that Retailer of the Year was The Co-Op, and that the overall winner on the evening was Aurora Fashions/Thomas Pink/BT.

This entry was posted on Tuesday, November 2nd, 2010 at 12:52 @578 and is filed under DailyDOOH Update. You can follow any responses to this entry through the RSS 2.0 feed. You can leave a response, or trackback from your own site.