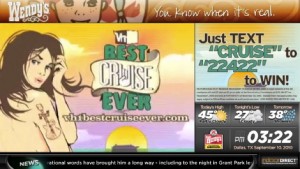 One viewer of the Restaurant Entertainment Network’s theBITE show will receive a round-trip vacation for two on board VH1 Best Cruise Ever. The trip includes airfare, an ocean-view cabin, picture and meet-and-greet opportunity with at least one of the headliners.

VH1 Best Cruise Ever will travel from Tampa to Cozumel from April 28 to May 2, 2011) onboard the Carnival Inspiration and features: Train, Lifehouse, Colbie Caillat, and The Script along with additional artists: Alpha Rev, Civil Twilight, Crowfield, The Daylights, Hope, Mat Kearney, Matt Wertz, Nikki Jean, One eskimO, Ryan Star, SafetySuit, Thriving Ivory and Trailer Park Ninjas.

The mobile contest is being promoted exclusively to viewers of the Restaurant Entertainment Network who can text ‘Cruise’ to 22422 for a chance to win. This exclusive sweepstakes will be promoted in more than 1,000 quick service restaurant locations that feature the Network.

Stephanie Werner, vice-president, partnerships and promotions, VH1, says that promoting VH1 Best Cruise Ever to millions of quick serve restaurant visitors helps the brand reach loyal and new viewers alike. She says, “We have a longstanding relationship with indoorDIRECT, and this initiative proves once again the value of our continued partnership.”

“Being the exclusive media company to offer the opportunity to win a cruise with artists of this caliber is something that we are proud to be a part of and intend to do more of in the future,” said Jonna Birgans, vice-president, Strategic Alliances at indoorDIRECT. “indoorDIRECT is rapidly becoming an established music platform within the digital place-based media industry and this venture demonstrates how our screens and environment can be used in promoting both artists and music labels alike.”

VH1 connects viewers to the music, artists and pop culture that matter to them most with TV series, specials, live events, exclusive online content and public affairs initiatives. VH1 is available in 98 million households in the U.S. VH1 also has an array of digital channels and services including: VH1Classic, VH1 Soul, vh1.com and VH1 Mobile,

This entry was posted on Thursday, November 4th, 2010 at 10:01 @459 and is filed under DailyDOOH Update. You can follow any responses to this entry through the RSS 2.0 feed. You can leave a response, or trackback from your own site.