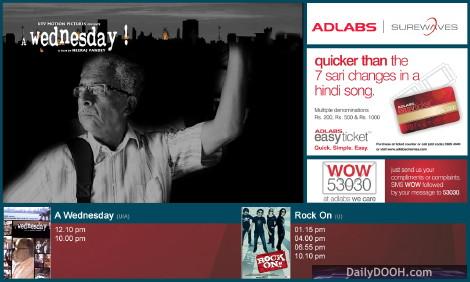 The screens placed at the Box Office and in the general Lobby area, display ticket availability, show timings, ticket costs and images of the films being aired.

Adlabs Films Limited (www.adlabsfilms.com), a member of the Reliance Anil Dhirubhai Ambani Group, is India’s fastest growing film entertainment company with a dominant position in Film Processing and DI services, television content and is India’s largest cinema chain with over 390 screens across US, India and Malaysia. Adlabs is a growing player in the film distribution space with a nationwide presence across India as well as offices in London, New York and San Jose.

This entry was posted on Thursday, September 18th, 2008 at 10:05 @462 and is filed under Scuttlebut. You can follow any responses to this entry through the RSS 2.0 feed. You can leave a response, or trackback from your own site.