NanoLumens were in Las Vegas last week for the Global Gaming Conference – Bally Technologies, one of, if not the largest exhibitor for the show and major slot machine/technology provider featured 4 x NanoLumens 112” displays curved to form a circle as the center piece for their booth. 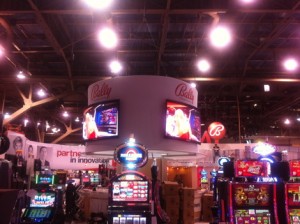 Weighing less than 90ib each

The displays weighed less than 90lbs each, allowing for easy, cost-effective setup. You will notice from the pictures if you look closely enough that one of the most impressive aspects of the structure (besides the slight curvature) is that it is hung from one single point of support – no truss, just one thin wire to the ceiling!

Bally used their own Coolsign software to power the screens and ran a wide variety of content including video product promotion, live feed of playboy bunnies signing autographs in the booth, an interactive horse race feature for one of their game offerings, and even NBA TV after the show ended.

The booth was built by Trade Show Fabrications and the NanoLumens screens were rented by Bally/TSF from Tallen Technology Rentals.

This entry was posted on Wednesday, November 24th, 2010 at 08:03 @377 and is filed under Scuttlebut. You can follow any responses to this entry through the RSS 2.0 feed. You can leave a response, or trackback from your own site.

One Response to “NanoLumens In Vegas”