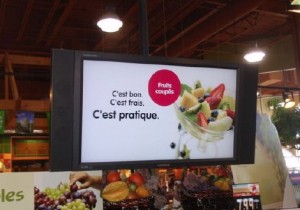 Most of the company’s controlled screens are found in approximately 200 IGA supermarkets – usually posted in the fresh produce departments of these stores to facilitate the purchasing experience of consumers. The flexibility of the system also allows IGA to provide instantaneous information to its customers whenever the need arises.

VIF also announced that its mandate with the Laurentian Bank has been enlarged to include the installation and management of the new, and most innovative format of digital advertising system to be deployed in the Laurentian Bank’s new branches.

In addition to the management of the close circuit television networks of these two well known corporations, VIF operates its own networks, VIF Télé, deployed in banking ATMs, and Medik-TV, in the waiting rooms of medical clinics (affiliated to Canadian Health Media Network, Toronto).

The content management of individual screens is effected through technology provided by the Montréal-based iGotcha Média.

With this new plateau of 1,000 installed screens, VIF Communication is one of the larger Québec-based providers of digital advertising in the province.

This entry was posted on Friday, November 26th, 2010 at 06:30 @313 and is filed under DailyDOOH Update. You can follow any responses to this entry through the RSS 2.0 feed. You can leave a response, or trackback from your own site.