The Bowler’s Holding The Batsman’s Willey

TV broadcaster SKY is using Amscreen’s network in the U.K. to promote the Ashes cricket matches, with scores being updated dynamically overnight, and broadcast to the masses the next morning.

“Whilst this is not rocket science and pretty much a given, advertisers have never been able to do this on a mass nationwide basis,” says Simon Sugar, CEO of Amscreen. “We are the first company that offers advertisers this ability.”

The campaign is also running with CBS Outdoor, JC Decaux and others but these tend to be focused within London on their digital platforms while Amscreen is truly nationwide. 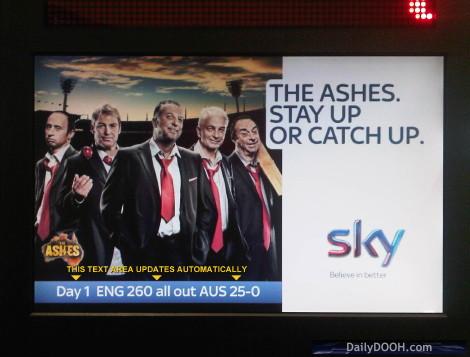 Seen above is the advertisement that went live early Thursday morning in the U.K – early Friday morning the ad would have said Australia 220/5, Ed. with the Ashes’ updated score from the Test cricket series played between England and Australia. It is international cricket’s most celebrated rivalry and dates back to 1882.

This entry was posted on Friday, November 26th, 2010 at 02:02 @126 and is filed under DailyDOOH Update. You can follow any responses to this entry through the RSS 2.0 feed. You can leave a response, or trackback from your own site.