And Here’s To You, Adrian!

Since our esteemed chief Adrian wasn’t able to join us in Montreal this week as planned, he was at least toasted roundly at this dinner at the famed Greek restaurant Milos on Tuesday night. 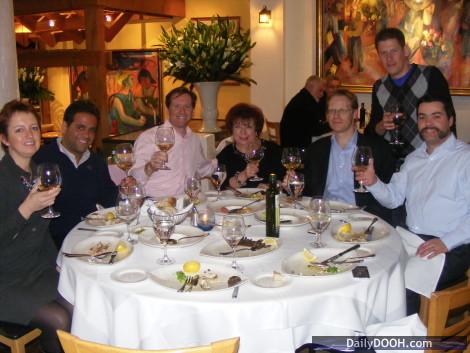 Neale, doing research on only his second trip to Canada, is going to think that Montrealers think only of food. After Sunday dinner at Chiasson’s home, there’s been lunch with Rich Langdale, interim CEO, DOmedia, from Columbus, Ohio, (French food at Verses); dinner with Peter Maag, executive vice-president business development, Haivision, Ville St-Laurent, Quebec, and Lou Giacalone, New York, and Raffi Vartian, Chicago, both of CoolSign (Italian at da Emma’s); and more.

With several more days of research in Montreal, we may see Neale sporting an extra 10 lbs. on his trip back to London, and we don’t mean in his suitcase!

This entry was posted on Wednesday, December 1st, 2010 at 08:07 @379 and is filed under Scuttlebut. You can follow any responses to this entry through the RSS 2.0 feed. You can leave a response, or trackback from your own site.