A new library of sexy, retro, lounge tracks from the 60s and 70s is now available to advertising and marketing creatives who wish to save time and money on music production. Refuel Music, a catalogue jointly owned by West One Music and Mood Media, consisting of thousands of retro, instrumental, pop, soul and jazz tracks, was launched last week at Molton House in Mayfair. 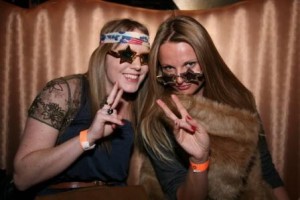 Executives heard how they can utilise the tracks in advertising and marketing campaigns, as well as film and radio production, which will save on the cost of hiring recording studios to produce their own music.

They also heard samples of the tracks, which include creations from prominent 70s title music artists such as Pete Moore (composer of the Pearl & Dean theme tune) and Alan Moorhouse.

One of the tracks from Refuel’s Jazz Fuel Volume 1 album, a showbiz big band swinger called ‘Opening night’, has already been used in a TV commercial for the sandwich retailer Subway, which aired in October.

Vanessa Walmsley, SVP of Corporate Marketing at Mood Media Corporation told us “This is an amazing archive of retro music and a valuable resource for advertising, marketing and production companies. We are thrilled that tracks we had produced in the 60’s and 70’s can now add value to the marketing and advertising campaigns for some of the UK’s leading brands.”

The tracks were originally produced for use as in-store audio and held in the extensive music library of Mood Media, the leading in-store media specialist. Mood Media signed a joint venture agreement with production company West One Music earlier this year to remaster the tracks for use in the advertising, film and TV, and production industries.

West One Music, which offers the complete production package such as music for movies, TV, trailers, promos, stings, games and more, plans to remaster enough tracks to produce up to 25 compilation albums under the Refuel brand in 2011. It has already produced nine albums over the past three months, which are now available to purchase.

This entry was posted on Monday, December 6th, 2010 at 10:53 @495 and is filed under DailyDOOH Update. You can follow any responses to this entry through the RSS 2.0 feed. You can leave a response, or trackback from your own site.