C-nario’s digital signage platform, C-nario Messenger, has been selected as the main engine behind the new multimedia displays at the museum of Brazil’s Sport Club Internacional (Inter), one of the country’s leading soccer teams. 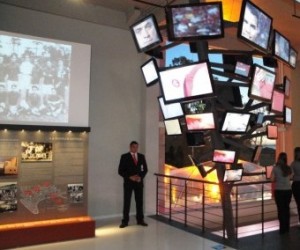 The display was implemented by EAV – Engenharia Audiovisual, an engineering company located in Brazil, specializing in consulting, training, designing and integration of professional audio visual systems. The museum is located at Inter’s stadium in Porto Alegre, and attracts 1,500-2000 visitors every week.

The visual display includes two large LED screens (400×200 cm) at the entrance to the museum. These function as a sort of TV news channel of Sport Club Internacional, showing team matches and other sports activities, training sessions, facts related to soccer, and more.

Inter’s museum displays the club’s trophies, medals, documents, and photos, as well as other memorabilia and documents related to the club’s history. In addition, the museum shows data about each match played, with all the players’ names, goals, referees, etc.

The museum also conveys Inter’s spirit using multimedia. Visitors can watch and listen to memories about the club’s history, and experience the emotions and feelings of the fans and supporters.

“Our main consideration in implementing the Inter Museum project was to create a unique and unforgettable visitor experience on the one hand, and to assure the delivery of the complete audio-visual information according to the museum’s demands on the other,” said engineer Flávio Loureiro, CTS, EAV – Engenharia Audiovisual. “We chose C-nario Messenger due to its excellent ability to handle high impact displays.”

“The Inter Museum joins other museums and visitor centers in which our solutions serve as the main driving force behind the displays,” said Tamir Ginat, C-nario’s CEO. “Sports is a strategic market for us, and we are happy to help Sport Club Internacional display its achievements and history in the best possible way.” 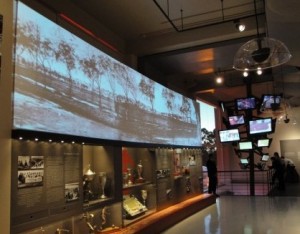 A special section of the museum, called ‘Ser Gigante’ (To Be Giant), includes three large front projector screens presenting the club’s historic path, including major achievements. Another section, called ‘The Torch’, contains 36 TV screens displaying scenes from Inter’s matches, plus images that show teams, flags and fans. The Torch is actually a kaleidoscopic mosaic of moving images portraying scenes of the team.

A section called ‘The Arena’, equipped with two large screens, honors the players, and shows films and TV shows connected to Inter. Additional 58” TV screens (called ‘The Prisms’) display information about every player who has played with the team.

The ‘Fan’s Virtual Deck’, an interactive front projection large screen, enables fans to have their image inserted into a clip commemorating a goal on the screen. Fans are assembled in rows filled with other fans clips (up to 30-40 images together).

A unique floor projection (three connected projectors) shows images and clips of important matches. Visitors feel like they are really at the match, and even run on the screens. The visit ends in a section called ‘The Campaigns’, where trophies are displayed, and behind them large images are projected on the walls, showing matches and players.

Due to the design and implementation work of EAV – Engenharia Audiovisual, and the performance of C-nario Messenger, these unique multimedia displays make it possible to deliver the spirit of Sport Club Internacional, creating the feeling of actually being in the great moments of the club’s history.

Currently, the museum is developing a huge database called  ‘Tactics and History’ , which will be accessible through multi-touch screens. Visitors will be able to browse the database for matches, players, championships and even the history of soccer, using a three-dimensional interface.

This entry was posted on Thursday, January 13th, 2011 at 09:08 @422 and is filed under DailyDOOH Update. You can follow any responses to this entry through the RSS 2.0 feed. You can leave a response, or trackback from your own site.