ScreenScape Claims To Be Growing Quickly

ScreenScape Networks, a young company located in Charlottetown in Prince Edward Island – Canada’s smallest province – is claiming over 1,000 networks in more than a dozen countries and including 30 U.S. states – and after only two years of being commercially available. 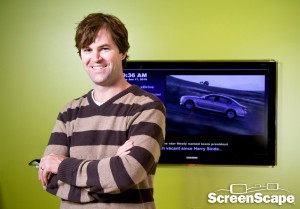 The company’s software-as-a-service was a year-and-a half in development, but has been quickly getting to critical mass as more and more operators – or as Mark Hemphill, founder – calls them ‘members’, come on board.

ScreenScape tends to target small and medium businesses. Well-known brands like Bauer and Castrol are on board, with networks in sporting goods stores and auto service centres. But individual stores and small chains are also customers.

What keeps attracting customers are a number of advantages, not the least of which is that fact that ‘members’ can exchange content with one another. For example, a bowling alley and a nearby pizza parlor could exchange content about each other on their respective screens to attract each other’s customers. They can also carry content from their suppliers.

Another advantage is the fact that that there is no need to install expensive equipment. Retailers need only an Internet connection and a monitor or display screen. Learning to use ScreenScape is fast and requires no special technical abilities. The person in charge of putting content into the display needs little more than ‘point and click’ knowledge. 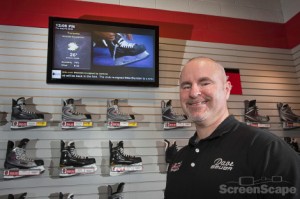 Further, a licence to operate ScreenScape costs as little as $10 a month for a single venue. Of course there are package prices for multi-stores, more screens, etc., usually ranging somewhere between $30 and $60 monthly. A single venue usually has no more than three screens.

And while some networks are small, some are extensive. Castrol freely provides automotive aftermarkets with a screen with ScreenScape so that they can become part of the network to get information on the brand.

And clients comes from everywhere: from golf courses to the Optometry News Network to Precision Tune Auto Care in the U.S. to Labatt in 30 British-style pubs, and many more. Foursquare uses a ScreenScape widget to build loyalty. Independent retail pharmacy network PharmaChoice uses it to educate and inform its customers.

Screenscape doesn’t sell advertising; that’s up to the companies who buy Screenscape licences, should they want. Screenscape makes its money through the access licences, although we got the feeling while talking to Hemphill that there may additional ways of earning money being considered for the future.

This entry was posted on Tuesday, January 18th, 2011 at 10:09 @465 and is filed under DailyDOOH Update. You can follow any responses to this entry through the RSS 2.0 feed. You can leave a response, or trackback from your own site.