Tamir Ginat, is C-Nario’s new CEO and he gave DailyDOOH the privilege of his first media interview a few weeks ago. He was brought into the digital signage software company at the end of last year to implement radical changes that will help it grow to the next level. 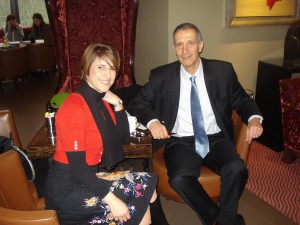 “Nobody is leading the digital signage market at the moment,” pointed out Ginat, “Big names such as Intel and Microsoft are coming into this space and showing interest. This is a fast growing area. I believe there will be more consolidation in this market in the next two to four years and that, at the end of it, there will be just a handful of strong companies leading the sector. C-nario is already in a very good position with good technology, lots of respect from the digital signage eco-system and an excellent team of people.”

Ginat comes from a different industry. Before joining C-nario he worked for NICE as president of EMEA. NICE sells digital recording systems to governments and banks. He worked at NICE for 15 years and says he can see similarities in the way the security market migrated from analogue to digital and how the OOH market is doing the same.

When he joined NICE, the company was small, with just 100 employees, today the company employs around 2,700 people world wide.

“We are just 40 people at C-nario, and I like the challenge of making the company grow,” said Tamir and added, “In the past couple of months we have been carrying out changes in the way the company is structured. We have brought our sales team closer to our clients. Some people working in Israel have now gone and new people in Europe and the US have been hired.”

“This is not a cost saving exercise,” underlined Ginat, “We are recruiting new people and we are changing the way us, as a company, think about ourselves and our position within the market.”

Ginat is himself originally from Israel. He relocated to London in the year 2000 with his wife and two children for the same reason, to be closer to his customers.

His change into the digital signage sector was because he can see the growth potential and also, he says, he wanted to “challenge his grey matter.”

So, where is C-nario going next?

“C-naio is going after the customer, we need to understand what they want and need,” Ginat said with a smile. “I think that the name digital signage will no longer be relevant in a couple of year’s time. When talking to my team, I refer to it as DS+. It is digital, but it is also connected and it’s becoming more and more mobile and interactive. The bit that is missing at the moment is demonstrating in tangible terms what is the business value for the customers.”

Ginat’s goal is to take the company’s know how, together with the unique projects it has done for customers and offer it to new customer and new vertical markets where a similar case might apply. Thinkng outside the box.

“Until today C-nario has been the best project company in the digital signage world. Now we are going to create products that can be bought off the shelf and that are flexible enough to use in different applications,” said Ginat and concluded, “I could not do this by my self. I have now a dream team. People that are self motivated and know that 24 hours in a day is not enough time because they want to really do thing and rise the bar.”

This entry was posted on Thursday, February 10th, 2011 at 08:01 @376 and is filed under DailyDOOH Update. You can follow any responses to this entry through the RSS 2.0 feed. You can leave a response, or trackback from your own site.