Kraft Foods recently launched a large scale digital out of home campaign, spanning several formats and including a live interactive poster at Euston mainline rail station. It is the second time JCDecaux’s Transvision screen has hosted a live copy campaign addressing individual members of the public on the station concourse with bespoke messages. 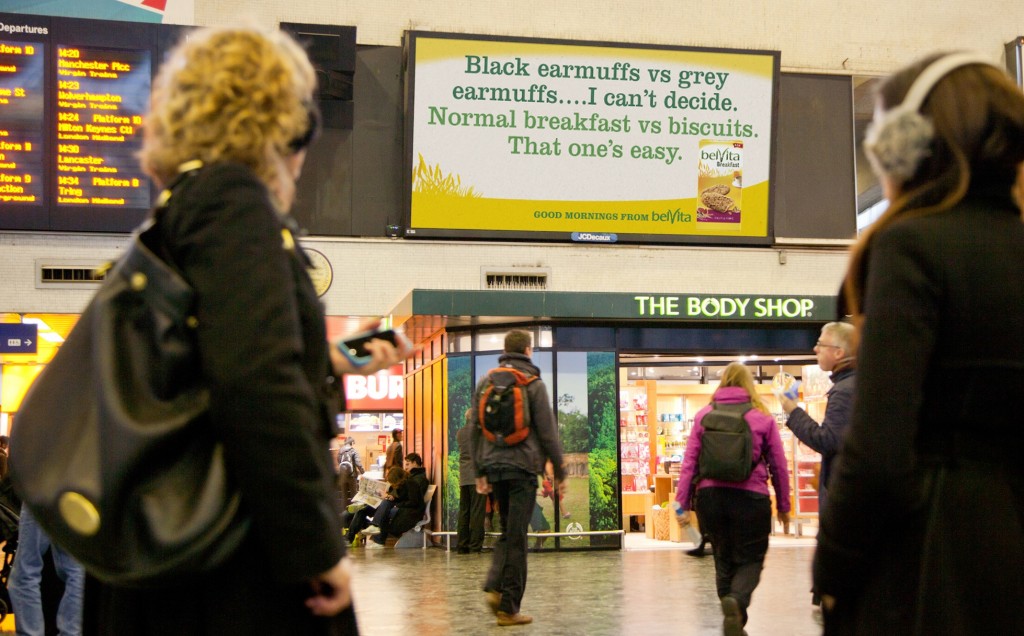 Messages were created in situ by Euro RSCG London. The live comments reflected activity on the concourse, picking out individual people by playfully enquiring about their breakfast habits and encouraging them to try Belvita Breakfast biscuits.

Nicola Wilkinson, Marketing Manager – Biscuits, at Kraft Foods UK, commented “We wanted a campaign that created a real buzz and was able to connect with commuters and raise awareness about Belvita Breakfast biscuits. Creating a humorous live copy execution was a great way to insure stand out during the busy rush hour commute.”

The live poster was supported by a broader day-part digital outdoor campaign from Euro RSCG London and produced by Grand Visual. The campaign targeted commuters across road, rail and underground formats as well as static posters.

This entry was posted on Tuesday, February 8th, 2011 at 09:22 @432 and is filed under DailyDOOH Update. You can follow any responses to this entry through the RSS 2.0 feed. You can leave a response, or trackback from your own site.

One Response to “Breakfast Biscuits Comedy At Euston Station”