It’s now less than two weeks before Digital Signage Expo and we’re starting to see some final plans from exhibitors. 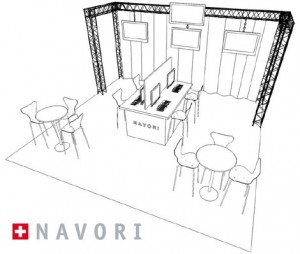 Navori has arranged a full booth for the first time – a 20 by 20 configuration with a two-sided demo station, as well as a pair of meeting tables and a series of screens along the back. Swiss-based Navori was one of the software vendors who wisely took a position at last week’s ISE in Amsterdam – 35,000 AV and systems people through the doors – and we’re pleased to see they are making the effort to show at DSE.

Navori will be demonstrating its newest software release, Navori QL, and backing up its assertion that through careful engineering and truly knowing what you are doing, it’s possible to deliver broadcast-quality video out of low-end PCs.

Navori will be at Booth 2028 at the Las Vegas Convention Center. We’re told much of the Montreal-based North American team will be on hand, as well as CEO/Founder Jerome Moeri, over from Lausanne.

This entry was posted on Thursday, February 10th, 2011 at 10:14 @468 and is filed under Scuttlebut. You can follow any responses to this entry through the RSS 2.0 feed. You can leave a response, or trackback from your own site.