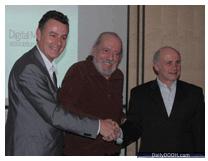 The point of creating the Federation is straight forward: by joining forces (representing 700 businesses) the new federation gains in strength and credibility as a political lobby in particular in the debate over the TLPE (Taxe Locale sur la Publicité Extérieure) a local tax on outdoor advertising.

It is also a question of working together and exchanging information. Michel Caza believes that the profession needs horizontal expansion, such as joining up with the GPSF, as much as it need vertical expansion “Today a printer who simply prints images can’t survive. He has to become a complete service-provider”.

The Federation has a lot of work to do. Already it is establishing plans for a rotating annual presidency. Linking up with other professional associations, such as POPAI, is also envisaged. Another idea would be to create a network partner-members, such as the “Enseigne et Innovation” (“Sign & Innovation”) Club, which has 150 members from the point-of-sale sector.

This entry was posted on Tuesday, February 15th, 2011 at 10:46 @490 and is filed under DailyDOOH Update. You can follow any responses to this entry through the RSS 2.0 feed. You can leave a response, or trackback from your own site.