Inwindow Outdoor this week launched a digital campaign at two premiere mall locations in the US to promote the upcoming release of the Paramount Pictures / Nickelodeon Movies animated feature film, Rango, in theatres nationwide March 4. 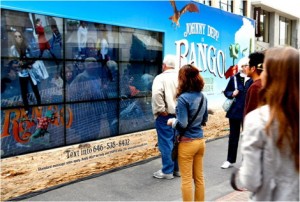 Located at The Grove in Los Angeles and The San Francisco Center, the displays use a combination of technologies developed by Inwindow’s digital team to incorporate passers-by into the scene and allow them to share their experience with friends and even purchase tickets via Fandango.

“Our latest digital creation introduces people to Rango by engaging them creatively while also enabling them to share their experience with friends,” said Steve Birnhak, CEO, Inwindow Outdoor.

As shoppers stop in front of the storefront screen, they see a mirrored view of the background with the shadow of a hawk circling overhead. Rango, the animated chameleon whose voice is supplied by Johnny Depp, appears in the scene as well, running frantically to avoid the hungry hawk. Inwindow’s real-time presence detection and image manipulation technology slowly blends the viewer into the background and converts them into a cartoon.

Users can opt to receive a photograph of themselves via SMS and have that image sent to Facebook or Twitter where it can be viewed by thousands more people.

Inwindow’s digital campaign debuted February 21 and can be seen for one month.

This entry was posted on Saturday, March 5th, 2011 at 08:55 @413 and is filed under DailyDOOH Update. You can follow any responses to this entry through the RSS 2.0 feed. You can leave a response, or trackback from your own site.