MicroTiles On Stage At TEDx Waterloo

Readers of the DailyDOOH probably don’t need any introduction to the wildly popular TED conferences where speakers present thought-provoking ideas on a wide range of topics related to technology, entertainment and design. 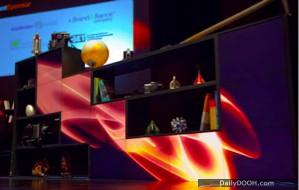 Almost as well known are the independently organized TEDx events, one of which – TEDx Waterloo – took place in Kitchener, Canada on March 3rd.

The stage design for TED events is usually informal and often has a ‘living room’ look.

At TEDx Waterloo, the stage designers used eleven MicroTiles as an integral part of a book case – in Issy-Neale (I-N) notation this is a _7X4_3H4T_2H2T2HT_H2T3HT_HT5H_ which was very clever use of new and old technology.

Also on-stage (on the table, below the TEDx Waterloo logo to the left in the picture below) was an eight-wide MicroTile ‘ribbon’ display highlighting the speaker’s name. I-N notation: 8X1_8T_

The TEDx Waterloo lobby also had a five high MicroTile display used as a Twitter wall. 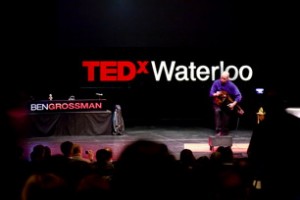 TEDx events are largely run by volunteers with support from local sponsors; this event was no exception with over 70 volunteers and more than 50 sponsors.

The MicroTiles were loaned by the University of Waterloo’s Canadian Centre of Art and Technology.

Content was created by Quarry Integrated Communications and the innovative bookshelf and ribbon shapes were by Jennifer Janik and Matt Gorbet, the geniuses at Mad Hatter.

The Twitter wall was created by Patrick Dinnen of Media Lab Toronto.

This entry was posted on Monday, March 7th, 2011 at 22:33 @981 and is filed under DailyDOOH Update. You can follow any responses to this entry through the RSS 2.0 feed. You can leave a response, or trackback from your own site.

3 Responses to “MicroTiles On Stage At TEDx Waterloo”