The newly built and recently opened Grange St. Pauls Hotel, in the City of London, followed an AV led design with a 48 screen Infinite Plasma video wall chosen to feature in its Atrium.

The exclusive hotel sits alongside the famous cathedral and features integrated AV at every turn, designed to impress guests as soon as they step foot through the door.

Specialist integrator 2Ci was approached by the hotel’s architect to discuss videowall technologies that would work in the Atrium’s bright environment.

2Ci worked with videowall experts PSCo to identify the Infinite Plasma as the ideal solution, Stuart Holmes, managing director of PSCo explained, “From the consultation process, it was evident that the Infinite range would be the most

appropriate solution due to the size of the gap between the screens. With such a strong focus on advanced technology throughout the hotel, it was vital to make the videowall an impressive centre piece.” 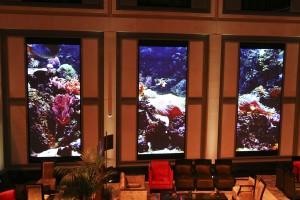 2Ci and the hotel’s in house AV department worked together to install three Infinite Plasma walls consisting of 48 screens into the hotel’s 80ft Atrium. The three vertical strips in 2 x 16 configurations are programmed to display aquatic imagery to form part of the ambience, which can then be changed to suit different seasons or events.

Habs Akram, managing director of 2Ci explained, “This is one of the largest installations of the Infinite Plasma screens in the UK to date and is a feature of the hotel. Continuing with the advanced AV concept, we also brought in a 103” Panasonic screen for the Royal Presidential Suite which was quite a feat!”

The BIC (Burn In Compensation) technology of the Infinite Plasmas was also a deciding factor. This dramatically reduces and even eradicates the effects of screen burn and features truly groundbreaking technology which equips screens to deal with repetitive and static imagery, unlike any other plasma display available.

The screens are a new generation of Infinite Plasmas with a seam gap of just 3.8mm, increased contrast and brightness ratios, combined with a new anti-reflective surface; they are perfect for high ambient light environments. The hotel’s meeting facilities also include 25 x 65” Panasonic plasmas.

This entry was posted on Wednesday, March 10th, 2010 at 10:20 @472 and is filed under DailyDOOH Update. You can follow any responses to this entry through the RSS 2.0 feed. You can leave a response, or trackback from your own site.