London This Week #rwc20 vs #rbtexpo

If you missed STRATACACHE‘s PrimaSeeTM Translucent Retail Display (PrimaSee) at #nrf11 or #dse2011 earlier this year then there’s a good chance to take a look at it this week in London at the Retail Business Technology Expo (stand #647) at Earls Court March 16-17, 2011. 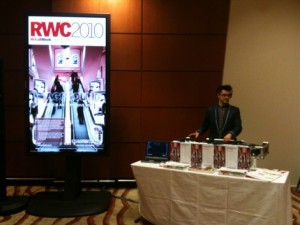 An early Morrissey or Pablo Clarke?

STRATACACHE’s head of europe, Jason Palmer is also speaking. His session entitled, ‘Retailers deploying profitable multi-thousand digital display networks that also make great impact on the customer experience, how?‘, will take place on 17th March 2011 at 3:30-4:05 p.m. in Theatre A .

Starmount Systems (stand #630) and 10 Squared (stand #116) are also exhibiting (everything on #116 will be powered by signagelive we believe).

Unfortunately this event conflicts with the Retail Week Conference #rwc20 (also being held 16th/17th March) at the Hilton Metropole, London which will see 950 delegates (up from 450 last year) attend to hear from the UK’s leading Retail executives and thought leaders – even a certain Sir Philip Green is speaking!

Signagelive will also make a big impression at that event as a network of signagelive powered screens and projectors will inform and entertain attendees with a full schedule of live and pre-created content, including:

This entry was posted on Monday, March 14th, 2011 at 12:01 @542 and is filed under DailyDOOH Update. You can follow any responses to this entry through the RSS 2.0 feed. You can leave a response, or trackback from your own site.