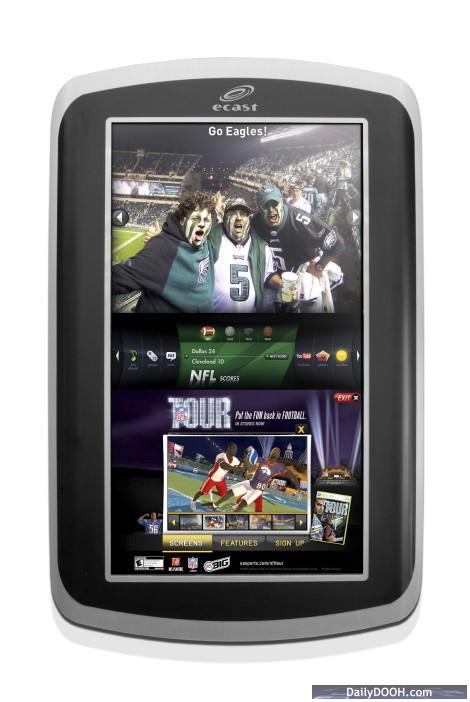 Ecast is expecting to have 1,000 of its new Ecast IQ touchscreen media products across the U.S. with the next 12 months – likely starting with sports arenas, since we hear it is already negotiating with two unnamed arenas.

With the new IQ, which gives marketers a different way to entertain and inform digitally savvy consumers out of home, Ecast is taking aim at the retail, hotel, sports/entertainment arenas and healthcare sectors.

The Ecast IQ doesn’t look too much different from Ecast EQ screens currently in 10,000 bars and restaurants in the U.S., except for being a slimmer line – but the difference stops there.

“This is subscription and advertising supported, and very interactional,” says Bob Cooney, Vice President Manufacturing Business Development, who says that Ecast has put about $50 million in capital in the design and software of its products. The IQ is manufactured by the OEM Computing Services division of Arrow Electronics.

The IQ is a 40-inch vertically oriented flat-panel 1080p high-definition touchscreen powered by Ecast’s robust media platform. Bringing the functionality of the Internet to out-of-home venues, the Ecast platform utilizes Web-based technology, including DoubleClick DART, to deliver targeted, on-demand content including interactive advertising, video, real-time surveys, games and more. The Ecast platform supports a wide array of third-party applications, allowing easy integration of popular services such as mobile, e-commerce and social media including photo sharing. For example, through a partnership with LocaModa – an interactive media platform connecting digital out-of-home, mobile and web networks –consumers can use their cell phones to interact with Ecast IQ, enhancing the personalized experience by extending it beyond the device itself.

“With the IQ, we can track each user’s behaviour in real time,” says Cooney. “Each time he/she touches the interactive screen, its sends a message to our ad servers telling us exactly what is happening on that device. Within 100 milliseconds, the ad server then tells that screen what to show next. And that happens over 1 billion times a month across our network. This means that each person’s experience is going to be different and tailored to their interests across any number of screens. And being able to track behaviour also allows Ecast to not only know the number of users, but to better target ads for advertisers.”

Advertising sales are handled by Ecast own sales staff operating out of offices in New York, San Francisco, Seattle, and Houston/Dallas.

Cooney says that, in an arena, IQs could be located in, for example, club lounges, skyboxes, and concourses with everything from ticket information to information about the team and local restaurants, as well as allowing users to text message, play games and interact with other forms of entertainment.
–
In medical and health centres, Cooney expects the first applications to be in dental and cosmetic surgery offices where IQs could help upsell, as well as give lifestyle information and health tips, along with local weather and entertainment.

In hotels, the IQ could act as a virtual concierge. And in malls, rather than in the general concourse, Cooney expects that IQs will go right into individual retail outlets, giving manufacturers the chance to interact directly with consumers on a one-to-one basis.

“Based on our use of EQs where we have approximately 40 national brands, advertising on IQs will likely be mainly national advertisers but targeted locally,” says Cooney, who claims Ecast is already getting interest in its IQ from Italy and Brazil.

This entry was posted on Thursday, October 23rd, 2008 at 06:00 @291 and is filed under Scuttlebut. You can follow any responses to this entry through the RSS 2.0 feed. You can leave a response, or trackback from your own site.