The United Nations Foundation has launched a nationwide, out-of-home advertising campaign that leverages the power of digital advertising to link Americans to the fight against global problems. 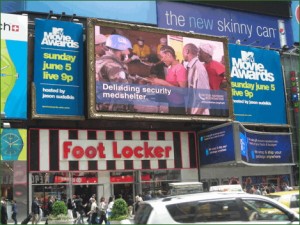 The campaign has been made possible by a partnership with Posterscope USA, leading out-of-home communications agency, and 18 of its media partners, who have donated prime advertising space around the country worth millions of dollars, to help the UN Foundation reach Americans at all points throughout their day, with the reminder that everyone has a role to play in solving global problems.

The campaign uses digital displays in environments such as malls, universities, taxis, rail stations and airports, some of which are coupled with mobile prompts, as well as in high-profile outdoor locations through digital billboards, static wallscapes and Times Square digital spectaculars. It’s estimated that, together, these spots will deliver more than one billion impressions during the spring/early summer of 2011. The spots include calls to action from UN Foundation-sponsored campaigns including Girl Up, Nothing But Nets, the Global Alliance for Clean Cookstoves and the Better World Campaign.

By working with Posterscope’s digital and innovations expert division Hyperspace as well as the media vendors, the UN was able to select both creative and engagement elements that would optimally engage their audiences with these global messages. Akoo out-of-home television network, for example, selected the UN Foundation’s Girl Up campaign as the ideal opportunity to turn out a distinctive ‘text to donate’ campaign that aims to engage and motivate teenage audiences with its interactive music video programming available throughout 162 malls and 22 universities in 63 U.S. markets. The ads inform the public about the need to support adolescent girls around the world, and then invites them to make a donation by texting GIRLUP to 90999. These ads aim to build awareness while bolstering support for UN programs on the ground in places like Malawi, Ethiopia, and Guatemala that help girls get an education, have access to better health care, and combat child marriage.

Kathy Calvin, UN Foundation CEO, says, “This public awareness partnership demonstrates the generosity and willingness of our friends in the advertising community to help people get engaged in positive, meaningful ways that add value to their lives and to the lives of millions around the world. We’re grateful to Posterscope and to the dozens of media partners who are proof of the power of what can be accomplished when Main Street and Madison Avenue come together to rally people around the work of the United Nations. Americans understand that building a brighter future for those who need it creates a better world for all of us, and they want to know how they can be part of that movement.”

The inventory obtained by Posterscope for the campaign enables the UN Foundation to engage Americans in more than 60 markets across multiple advertising platforms. The use of digital out-of-home media created an opportunity to implement a varied yet tailored campaign featuring custom video and still spots around seven ¬¬issue areas: ‘Help the UN Help Haiti’;
‘Someday’; Girl Up: ‘Connecting the Dots’;
Nothing But Nets, ‘Together We Can Cover a Continent’; Global Alliance for Clean Cookstoves, ‘Cooking Shouldn’t Kill’; The Better World Campaign, ‘UNanimoUS’; The Millennium Development Goals, ‘Everyone Has a Role’.

Brigg Hyland, chief client officer of Posterscope USA, says, “With the recent rise in mobile philanthropy, we jumped at the opportunity to take advantage of the undeniable synergies between mobile and OOH media. With Akoo’s generous space donation, for example, we are hoping the Girl Up text messaging initiative proves to be a success by reaching out to a targeted audience in a relevant environment with a congruous call to action, encouraging empathy and donations to the cause impacting today’s youth.”

Aaron Sherinian, UN Foundation’s executive director for communications and public affairs predicts that the campaign will be the first of a series of initiatives of this kind.

“The reality is that we cannot achieve our mission to help the UN without the support of partners who can reach millions of people with this message that everyone has to get involved,” says Sherinian. “The needs are urgent and the problems are serious but we’re also optimistic about what people can do when they embrace the potential of social good. Out-of-Home media owners have donated more than just their space and time as part of this campaign, they’ve given millions of people a chance to get involved in the biggest movement in history to help the world achieve some important goals.”

The United Nations Foundation, a public charity, was created in 1998 with entrepreneur and philanthropist Ted Turner’s historic $1 billion gift to support UN causes and activities. It builds and implements public/private partnerships to address the world’s most pressing problems, and works to broaden support for the UN through advocacy and public outreach.

This entry was posted on Wednesday, June 1st, 2011 at 10:00 @458 and is filed under DailyDOOH Update. You can follow any responses to this entry through the RSS 2.0 feed. You can leave a response, or trackback from your own site.