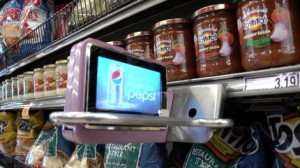 We are told that 3GTV combines the power and plannability of television with the efficiency and immediacy of digital media.

This pilot program marks the advent of what AMS calls the ‘digital backbone’, a media platform bringing power and communications throughout the retail store and letting brand marketers continue their conversations with shoppers into the store aisles. Over the past 10 years, AMS researched solutions to this challenge posed by lack of infrastructure to support in-store video and digital communication. The result was the development of 3GTV Networks, a system to make the retail store a planable media destination.

The company not only achieved the goal of extending television into the grocery store, but also launched what is believed to be the the first in-store digital communications backbone supporting digital messaging at the shelf-edge, 2-way communications, shopper tracking and measurement tools, and a range of future activity anticipated by current consumer behaviors.

“We are poised for what may arguably be one of the industry’s most critical transformations as cloud-computing finally takes its place in the physical store,” says Bob Wolinsky, AMS chairman and CEO. “Now, with the development of 3GTV, we are transforming the way marketers connect with shoppers, enabling them to extend their campaigns to the store and capitalize on the long-awaited retail communications revolution.”

Timed to the launch, top household consumer packaged goods including PepsiCo, Kraft Foods, Nestle Purina, and others have signed on for the pilot.

“We are extremely impressed with the capabilities 3GTV can deliver, and are anxious for 3GTV to build scale quickly,” says Geoff Kuzio, vice- president, PepsiCo, Delhaize America customer team.

3GTV Networks is recognized as interoperable with other television networks, so WDCW, Washington, D.C.’s CW affiliate, has signed on to exchange airtime with the 3GTV network on an equivalent audience delivery basis.

“3GTV is a natural fit for us as we continue to look for effective ways to expand our numerous platforms, and diversify our station’s ability to connect advertisers with the D.C. marketplace,” says Glenn Coleman, general sales manager at WDCW. “We see 3GTV as a game-changer for local broadcasters, providing an invaluable opportunity to grow our audience delivery and be in a space that we could not otherwise be.”

According to recent Booz & Company studies, shopper marketing is growing exponentially, reaching $35 billion annually. Most packaged goods manufacturers rank shopper marketing as their number one investment, claiming spending increases will exceed 5% annually. AMS management claims that 3GTV enables continued growth for this sector, by providing marketers and retailers a platform to execute new activities and improve the effectiveness of their overall marketing efforts.

Located in the retail environment, 3GTV is supported by AMS’ proprietary digital infrastructure, which enables power and connectivity throughout the store. The company’s PlayScan and FlowScan services make possible the conversion of retail stores into planable media destinations and shoppers into a measurable viewing audience. AMS management says that these technologies are poised to become the industry standard for accountability, compliance and measurability for out-of-home media investments.

This entry was posted on Thursday, June 30th, 2011 at 10:04 @461 and is filed under DailyDOOH Update. You can follow any responses to this entry through the RSS 2.0 feed. You can leave a response, or trackback from your own site.