From its headquarters in Baltimore’s Emerging Technology Center this morning, NV3 Technologies announced the availability and deployment of the third-generation NTC series Charging Kiosks.

NV3’s Charging Kiosks, available in both desktop and floor models, are ideally suited for myriad high-traffic locations such as convention centers, restaurants, hotels, theme parks, banks, universities, hospitals, airports and shopping malls. Geared for the charging of tablets, cell phones and smart phones (not laptops) they have already been deployed at the Baltimore Convention Centre, the Baltimore Visitors’ Centre, and the Bay Café, among other locations.

“Unlike other kiosks being marketed to the public, our American-made units provide up to 800 milliamps – compared to 500 – for a more powerful flow of electric current with which to rapidly charge Blackberries, iPhones, iPads, Droids, Nokia, Samsung, LG, Sanyo, Motorola, Sony Ericsson and other widely used devices.”

NV3’s charging technology uses an intelligent monitoring algorithm, which ensures that the requested recharge is directed to the appropriate device. Also, NV3’s charging kiosks will not impact a business’s energy consumption to cause any increase in its electric bill.

As Mobile Internet increases in popularity, consumers will have an even greater need for extended battery life as well as a convenient option to charge their device in public venues. Sites and locations that offer this value-added convenience are also able to deliver target advertising and marketing messages to a captive audience through the kiosks’ interactive displays, touchscreens, and customized branding. 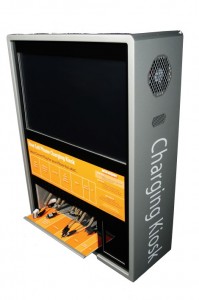 Another significant point of differentiation for the NTC series kiosks is that they operate NV3’s easy-to-use, plug and play interactive media player and digital signage software. Remote, secure accessibility empowers companies with the flexibility and ease for managing dynamic content in real-time.

THE NTC Floor Model Kiosks (1932, 2240, 2646), which can charge up to 12 devices simultaneously, stand 73” high and are 30 inches wide. The base unit comes with a 19″ HD LCD screen on top and a 32” HD LCD screen on the bottom. Media content is powered by an internal flash drive media player for the top and bottom screens to display media content. Available options include: touch screen, remote media management, credit card and bill acceptors, and custom branding.

Earlier this year, NV3 reported a 300% increase in revenue since 2008, and numerous digital signage and charging kiosk deployments across the globe.

This entry was posted on Wednesday, July 13th, 2011 at 15:00 @666 and is filed under Scuttlebut. You can follow any responses to this entry through the RSS 2.0 feed. You can leave a response, or trackback from your own site.