The Media Merchants recently worked with communications agency Cossette Montreal and Jump Studios to bring a little bit of Quebec to Toronto. 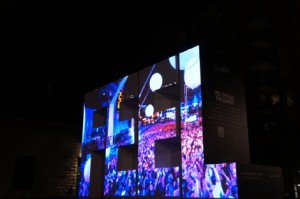 In late June, they unveiled a Quebec Tourism Object Mapping in the heart of Toronto’s historic Distillery District and on the corner of Adelaide and John Streets. The campaign engaged passersby with videos exploring the lively culture of Quebec that were mapped onto an installation of the word ‘FEEL’. The installation was the centre of attention all day and night, creating great street level interactions while spreading the Quebec vibe.

The videos, titled ‘Feel the Vibe”’, ‘Feel the Hype’ and ‘Feel the Thrill’, projected on to the structure with a Christie projector, were created by Cossette Montreal and were combined with visual effects and animation created by Jump Studios to bring across a three-minute visual experience that showcases Quebec’s vibrant food culture, music scene, cultural events and nature adventures. 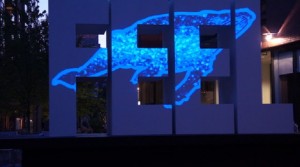 The Media Merchants designed the ‘FEEL’ structure, measuring 8’ tall x 14’ wide x 4’ deep, and developed and repurposed the content to fit the letters, which included custom animation and video that were mapped on site at both locations.

“Object mapping gives our clients the ability to tell a story using visually stunning content against the backdrop of a larger than life icon or product and the flexibility to set up where the activation can achieve the greatest impact,” says Brad Foster, chief marketing officer, The Media Merchants. “Objects can be virtually anything; letters, words, logos, bottles or cars. We look forward to being involved in more projects like this one.”

There was a sign on site with a QR code leading users to Quebec Tourism’s ‘feel’ campaign.

This entry was posted on Monday, July 18th, 2011 at 10:05 @462 and is filed under Scuttlebut. You can follow any responses to this entry through the RSS 2.0 feed. You can leave a response, or trackback from your own site.