In The World Of Emoticons

Since last Friday, a 3D billboard in New York City has been attempting to monitor people’s moods via Twitter and then expressing the general mood through a 3D mechanical face that smiles or frowns appropriately. 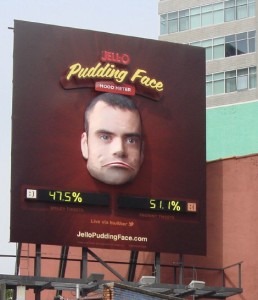 The board – an extension of Jell-O Pudding’s ‘Pudding Face’ marketing campaign – was launched by Crispin Poster + Bogusky. Its goal is
to remind consumers about the happiness and inexplicable grin that comes over everyone who enjoys Jell-O Pudding.

The agency has been monitoring Twitter for two months, and found that the global average of 1200 smiles 🙂 and 800 frowns 🙁 a minute was pretty consistent. Using that as a basis, it arranged a billboard in Soho that pings Twitter every seven seconds, searching for the :)’s and :(‘s and adjusting the percentage, and the face as necessary.

But, the agency and its client Kraft Foods’ Jell-O are also trying to make the mood better, by giving away free pudding. Whenever the national average of smiley faces dips below 51%, coupons are given at random to Twitter frowners. who respond by typing 😀 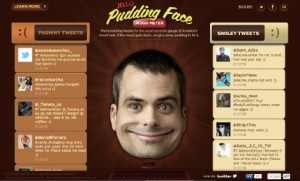 This all started with the launch of the Jell-O Pudding Mood Meter website in early July. The site shows the smiles and frown tweets from around the world in real time. When the mood of the world deviates from that norm mentioned, the agency and client use Twitter to give pudding to people who have frowned recently via the unique redemption link for free Jell-O pudding. When they click the link and get their free pudding, they are encouraged to tweet a pudding face :D. That emoticon is also tracked and works to bring the mood of the world back up.

There’s a rather amusing footnote to this effort. It turns out that the face used is that of Ian Hart, a former CP+B copywriter now at BBH, New York. Hart had signed a release not knowing how it would be used. We understand that his billboard face is rather embarrassingly located around the corner from his new agency.

What a great campaign, as Sheldon Cooper would say “In the world of emoticons I was COLON CAPITAL D”

This entry was posted on Friday, August 5th, 2011 at 06:00 @291 and is filed under DailyDOOH Update. You can follow any responses to this entry through the RSS 2.0 feed. You can leave a response, or trackback from your own site.

One Response to “In The World Of Emoticons”