Daktronics, Inc. (Nasdaq – DAKT) of Brookings, S.D., has been chosen by the Spanish company Callao Digital to design, manufacture, and install two huge light emitting diode (LED) displays on the façade of the Cines Callao theatre in Madrid, Spain, located at the intersection of the Gran Vía, one of the world’s most famous streets and of the Callao Plaza. 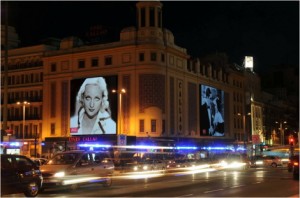 This Plaza has a capacity of 10,000 people, is the third most transited in Europe with 113 million people passing through annually, and a daily traffic of 51,000 vehicles. The display installations are scheduled to be completed by the end of May of 2011 and will be the highest resolution, HD-capable LED displays in Spain.

“The installation was a success because of the quality of the image, colors, contrast and brightness of the HD screens,” said Gerardo Baranowski, Callao Digital’s General Director, “Daktronics has led us to an ideal launch of our project. The impact and recognition we have received from our customers and the general public confirms that we have chosen the best manufacturer for our project.”

The Cines Callao’s location in the heart of the city makes it an eye-catching attraction and a must-see for Madrid tourists as well as the local movie-goers. Thanks to the installation of the new Daktronics displays, Cines Callao will convert into one of the Plaza’s major focal points.

“This project is exciting for Daktronics to be a part of and represents our largest single project in Spain,” said Mike Charles, International Sales, Daktronics.

Cines Callao was built by Luis Gutierrez in 1926 and opened that December issuing the film, Luis Candelas, The Villain of Madrid. The theatre is organized by Callao Digital and is located in Madrid’s Plaza de Callao. Cines Callao architecture is Spanish neo-baroque in style with interior decoration and art deco Viennese suggestions. With an initial capacity of 1,500 people, a terrace designed with outdoor film screening in mind. The theatre is a reference of the cinematographic history: it was the first to screen sound film in Spain.

This entry was posted on Wednesday, August 17th, 2011 at 10:20 @472 and is filed under DailyDOOH Update. You can follow any responses to this entry through the RSS 2.0 feed. You can leave a response, or trackback from your own site.