Ted Cohn, chief architect at Barnes & Noble, gave attendants at the CIO Retail Summit in Scottsdale, Arizona, a great rundown on the fast – nine month – development of the Nook, the on-screen book reader, along with the improvements made since and its SimpleTouch spin-off. 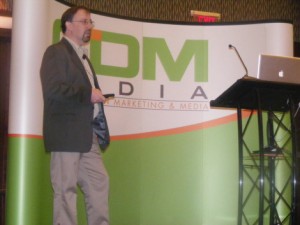 Cohn took the audience on a step-by-step tour from his hiring of an enthusiastic, talented team in Palo Alto, Calfornia, to working with other offices in New York, San Francisco, and Vancouver, and melding them together into – finally – a cohesive team.

“With the recession in 2008 and new technical products being pushed in the market in 2009, Barnes & Noble management saw that it would have to innovate,” Cohn said. “And we would never have succeeded without the complete support of top management and its willingness to spend big dollars, plus a totally motivated team that literally worked every night and weekend for six months.“

The aim was to build the best reader on the planet and to beat the Kindle, Amazon’s product. Cohn – faced with all the hiring, as well – and his team had to develop from scratch, not only writing code and requirements but finding hardware for the engineers to test, learning the Android platform, arranging WiFi into stores, and a myriad of other details.

“Working with the web team was awful, Google wasn’t very helpful in us learning the Android, and it was hard to deal with IT,” Cohn listed among early difficulties faced.

Nevertheless, Nook 1.0 came out meeting the nine month deadline. While Sony said it was great, product reviewers panned it, so it was back to the drawing board.

What has finally resulted – along with a team that has grown from 18 to 200 – is what many believe is a superb product, with the Nook Color and all the bells and whistles. (And with Apple banning the selling of a lot of titles, “It was good that we had our own hardware,” said Cohn.)

Now the Vancouver team has been brought in-house; ‘cloud’ and platform teams have been added; and there’s now an App store, Flash support and a better screen. 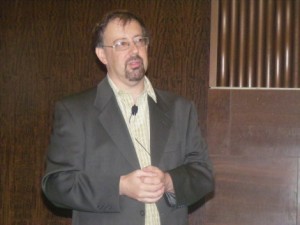 “And the reviewers that panned the original product have now given it glowing reviews,” Cohn said. The company has now also been innovating further with a newer, faster, less expensive Nook SimpleTouch, without colour. and targeting the masses.

“The keys to the Nook were: a success were: a small motivated team; the ability to make decisions as needed; open source (Android); keeping it simple; and leverage by Barnes & Noble,” says Cohn.

While Barnes was permitted to give numbers other than to say that Nook is selling over paperback sales and market share is up 27% in 2011 over 2009, his talk as RIO Retail was given the same day as B&N released its Q1 report, with reviewers saying that, “The Nook is a super way to read and store books. Its features and functions make it far superior to the Kindle, unless price is the only criterion. Amazon’s tablet will obsolete the Kindle anyway, and Barnes & Noble should have the e-book market to itself in a year or two.” (MediaTech Capital Partners’ Porter Bibb.)

Sales of the Nook e-reader and e-books have been helping to offset the company’s sinking physical book sales. Total revenue was up 2% percent to US$1.42 billion. Store revenue was down 3% to $1 billion. Online revenue was up 37% to $198 million. The retailer posted a loss of $56.6 million, or 99 cents a share, for the quarter.

With an expected influx of shoppers coming from the failed Borders, Barnes & Noble is expecting its highest holiday numbers in five years, and forecasts sales of the Nook and e-books will more than double this fiscal year to $1.8 billion. The news sent the company’s shares up 8%.

Barnes & Noble has bet its future on the success of the Nook. Sales of Nook devices rose 140% to $277 million for the quarter. Projections are that the Nook will account for a fourth of the chain’s sales and all of its growth.

This entry was posted on Thursday, September 1st, 2011 at 22:50 @993 and is filed under DailyDOOH Update. You can follow any responses to this entry through the RSS 2.0 feed. You can leave a response, or trackback from your own site.