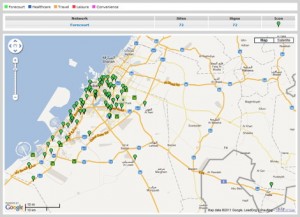 SmartScreen already have 80+ screens in Dubai

SmartScreen is a new entity created to provide digital signage solutions and has sought the expertise of Amscreen based on the success of its forecourt and convenience networks in the UK and Europe. SmartScreen have already generated significant interest in the Amscreen product and recently signed up their first forecourt deal with Middle Eastern petrol retailer ENOC/EPPCO as well as the Zoom convenience store network within all Dubai Metro Stations.

This deal sees Amscreen continue its expansion outside of the UK, following the recent announcement of the growth of its BP network into European forecourts. 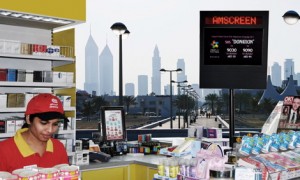 SmartScreen will secure their own content and have appointed sales agency AIR Media, part of the AIR Communications Group, to sell advertising on its behalf. Amscreen will license the use of their bespoke content delivery software to SmartScreen and provide ongoing technical support to their networks.

Abdul Bakhrani, CEO of SmartScreen told us “We were thoroughly impressed by Amscreen’s network in the UK and were keen to replicate this in our territories. We already have one key petrol operator on board and are really excited to see our forecourt network grow and to modernise digital signage solutions in the Middle East and Africa.”

Simon Sugar, CEO of Amscreen, said: “This deal is an exciting development for Amscreen as it is the first time we have sold signage units to a foreign company. We look forward to working with Smartscreen and seeing their networks develop in the Middle East and Africa”.

This entry was posted on Tuesday, September 6th, 2011 at 15:54 @704 and is filed under DailyDOOH Update. You can follow any responses to this entry through the RSS 2.0 feed. You can leave a response, or trackback from your own site.