Blue Bite, Proxama and Tapit, three organizations leading Near Field Communications development as a mainstream mobile marketing tool across the globe, have joined forces to form the NFC World Alliance. 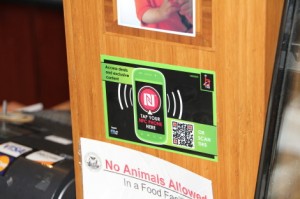 The three partners see NFC as a powerful technology for location-based mobile interaction.

“We’re really excited about this allowing cross border, global campaigns,” says Daniel Trigub, vice-president business development of Blue Bite. “Europe and Asia have more NFC-enabled phones, but once there are more available in the U.S., we believe that media planners and buyers will be looking at this as traditional media in a very short time. We know we can get a lot more engagement overseas, and once the U.S. catches up, we’ll have the network in place for international as well as national campaigns.”

The collaboration, composed of Blue Bite of New York for the America’s region, Proxama of London for the EMEA region and Tapit of Sydney for the Asia-Pacific region, was formed to create an efficient and trusted network of NFC specialists helping brands across the world to better connect with their target audiences. The three companies have already completed numerous successful marketing campaigns demonstrating the effectiveness of NFC for major global clients in their respective markets, and plan to bring their deployment experience, technological expertise and strategic partnerships to both consumers and brands worldwide.

Using NFC as the primary enabler, the Alliance has a vision to revolutionize the way people use their mobile phones by simplifying the delivery of content and enhancing the interaction with the physical world around them. While past campaigns have focused on the exchange of information, special offers and content between the brands and consumers, future uses will include more integration with social media and the ability to make purchases at virtually any Out-Of-Home media asset.

Blue Bite has seen great success with the mTAG platform it launched earlier this year, and has already completed campaigns for big names such as Hotels.com, TNT and The New York Times. 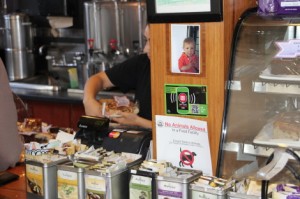 “We currently rolling out with Reach Media Group in San Francisco,” says Trigub. “We can put mTags on anything – a product, a table, a sign, anywhere – and we see DOOH screens as a major component in NFC use, not only for the mTags themselves, but as an educational tool to help people to learn to look for mTags and to touch them. You can’t push NFC on people. It’s early in the game, so it’s critical to educate people about them.”

Mikhail Damiani, CEO and co-founder of Blue Bite says that to be a part of this alliance as it will give Blue Bite “the ability to both improve the current NFC experience for our audience in the U.S., as well as expand the success of our campaigns for clients across the EMEA and Asia-Pacific regions.”

The three companies have similar views and missions. Blue Bite and Proxama were into Blue Tooth and WiFi early in the game while Tapit, a younger company, focused on NFC from its earliest days.

Jamie Conyngham CEO of Tapit says, “There are many other benefits of the alliance such as rapid information sharing between the three members in relation to advances in NFC technology and the application of it globally when connecting brands to their customers.”

Tapit recently closed its Angel Investment Round via Sydney Angels in an impressive 22 calendar days, further validating the company’s vision and unique approach. Tapit has already completed four NFC enabled campaigns with the global OOH leader JC Decaux. In a campaign for the prime time TV series the The Renovators, users were encouraged to tapit to download a ringtone. Advertising for Sydney’s top radio station Nova FM enabled users to tapit to stream radio and in a promotion for The QVB, one of central Sydney’s premier shopping centres, people were encouraged to tapit to go in the draw to win a shopping spree.

Earlier this year, Proxama deployed the first NFC campaign of its kind in the U.K. for the new X-Men movie working with out-of-home media specialists Posterscope and JCDecaux. It has subsequently built upon that success with its recent US advertising campaign for the launch of the latest season of VH-1’s Basketball Wives TV program.

Miles Quitmann, managing director, Proxama, says, “NFC is an excellent example of disruptive technology that delivers measurable benefits to both consumers and the brands employing it. For many years now Proxama has been at the forefront of building and deploying NFC mobile wallet payment and marketing solutions in Europe, so we are really excited to be joining forces with our partners in the US and Asia-Pacific to extend the global reach of NFC.”

About Blue Bite
Blue Bite is a leading mobile-marketing solutions provider utilizing a targeted, location-based approach to reach captive audiences on their personal mobile devices. Blue Bite currently has the largest proximity marketing network in the U.S. with over 1,000 locations in the top DMAs, capable of delivering over 30 million on-screen impressions and 300,000 unique mobile downloads per month. Blue Bite has partnered with many of the leading Out-of-Home Companies in the U.S. and prides itself on creating an interactive two-way medium by enabling consumers to connect with digital and traditional media via the mobile phone.

About Tapit
Tapit was founded in March, 2011, and is headquartered in Sydney, Australia. Its vision is to revolutionize the way people use their mobile phones by simplifying the delivery of content using NFC as the enabler. Tapit works with innovative agencies, brands, handset manufacturers and carriers to bring this vision to life.

This entry was posted on Thursday, September 8th, 2011 at 23:16 @011 and is filed under DailyDOOH Update. You can follow any responses to this entry through the RSS 2.0 feed. You can leave a response, or trackback from your own site.