Here’s a few impressions from PLASA 11, the trade show of the Professional Lighting And Sound Association, which we attended at Earls Court in London today. 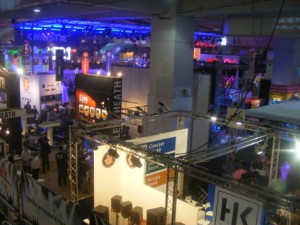 A partial view from above

First of all, on entering via Earls Court Two, it looked like it was going to be a pretty small show with small attendance, Boy, were we wrong! It turned out to be big and, by the time we left in early afternoon, we don’t think there was a booth anywhere without a crowd milling around.

And it was hot. With all the lighting and LED screens throughout the hall, Earls Court could have used its air conditioning on at super-high. (We don’t think it was on at all.)

While this isn’t a ‘normal’ DOOH or digital signage show per se, we certainly got an eyeful of LED screens along with other lighting, projectors of every sort, staging and seating equipment, fake smoke to fake snow, and lots of audio demonstrations. We even spotted a job-availability board, with lots of entries.

A huge LED wall couldn’t be missed on entering, and from there we encountered verticals, horizontals, screens within screens, prettily framed screens – mostly of pretty good resolution although the pixelation of a few did make one want to cringe. And, of course, several compilations of Christie MicroTiles stood out attractively.

All in all, we’d definitely give the show a thumbs up! We’ll be posting shortly a few photos of some of many LED screens noticed throughout the show.

This entry was posted on Monday, September 12th, 2011 at 18:11 @799 and is filed under DailyDOOH Update. You can follow any responses to this entry through the RSS 2.0 feed. Both comments and pings are currently closed.