Geny was busy looking after lots of Spaniards and Italians at #plasashow but the rest of the team spent a few hours walking the floor at Earls Court, London today … 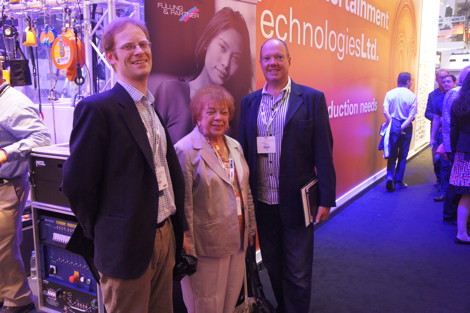 Whilst predominantly a ‘lighting show’ aimed at the rental / staging market it was well worth a trip into town (Gail is in Europe this week as she heads off to Amsterdam tomorrow to cover the #scalaconf) and a quick walk around.

We bumped into James Abdool from MediaZest (who kindly took this picture) and also saw a number of DOOH folks, including Kevin Williams, director of the DNA Conference.

We will have a couple of stories up in the next few hours (but nothing too much). There was some good coverage from @AVmag on twitter who were obviously walking the show floor the same as us.

This entry was posted on Monday, September 12th, 2011 at 16:35 @732 and is filed under Scuttlebut. You can follow any responses to this entry through the RSS 2.0 feed. You can leave a response, or trackback from your own site.