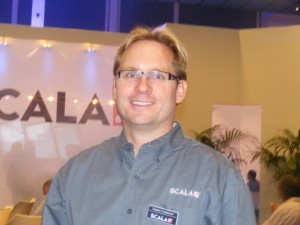 First thing on morning two of the International Scala Conference being held in Noordwijkerhout, The Netherlands, we learned of a nice promotion for Damon Crowhurst, recently Scala’s director of business development and services.

Crowhurst has been appointed senior director for EMEA, responsible for sales everywhere except for Germany and The Netherlands. He’s been with Scala for two-and-a half years, joining the company from AMX and was earlier with Inspired Signage.

This entry was posted on Thursday, September 15th, 2011 at 12:33 @564 and is filed under Scuttlebut. You can follow any responses to this entry through the RSS 2.0 feed. You can leave a response, or trackback from your own site.