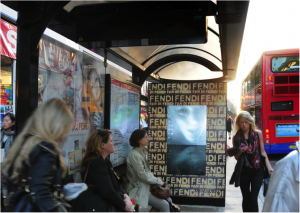 Booked and planned by KR MediaCom and Kinetic Worldwide, the London campaign includes two sites in proximity to Somerset House – the landmark headquarters for London Fashion Week, plus one in the retail heart of London – Oxford Street.

Nicola Rust, from KR MediaCom says: “This bespoke campaign has allowed Fendi to target an upmarket fashion conscious audience within close proximity to London Fashion Week.  The use of the digital screen allowed us to bring the TV commercial to life on the high street, engaging our audience at points of relevance through the city.”

This entry was posted on Monday, September 19th, 2011 at 21:15 @927 and is filed under DailyDOOH Update. You can follow any responses to this entry through the RSS 2.0 feed. You can leave a response, or trackback from your own site.